skip to main content
Return to Fordham University
You are at:Home»Inside Fordham»Professor Makes a Case for Classical Music 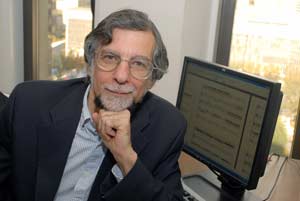 Musicologist Lawrence Kramer, Ph.D., has been working since the 1980s to alter the way classical music is understood. More recently, he has been investigating the music’s cultural status.

“Classical music is losing ground in the United States,” said Kramer, who is a professor of English and music, and who doubles as a composer. The warning signs are readily apparent, including smaller and older audiences, declining media coverage and symphony orchestras that must struggle to get funding. Only opera is still a bright spot.

It’s no secret that teens and 20-somethings prefer a mesh of modern sounds; there is not enough Beethoven on their iPods, he said. But earlier generations of young people also listened to emerging musical genres and classical music endured, even thrived. Why is there a decline now?

A primary reason, according to Kramer, may be the decline in music education.

“Most studies show a direct relationship between early music education and a liking for classical music,” he said. “As schools cut music programs, which they have done across the board in the last 20 years, the future audience for classical music is threatened. The music lives or dies on the basis of its circulation through concerts, broadcasts, recordings, etc., all of which, of course, is driven by economic forces as well as aesthetic values.”

One solution, Kramer said, is to restore music education. “Some effort is being made in that direction, and big organizations like symphony orchestras are ramping up their education programs and also seeking to loosen the somewhat ossified format of classical concerts,” he said.

Young people should not be asked to listen passively to classical music, but invited to appreciate and respond to this “exciting” and “conflict-ridden” art form, which can still speak persuasively for itself, he said.

“One of the most remarkable features of classical music is the way it always seems to teeter on the edge of speech,” Kramer said. “We can never know what it—almost—says, but we can harmonize our words with its sounds in ways worth hearing.”

Kramer, author of nine books on music, makes the case for the cultural importance of the genre in his latest, Why Classical Music Still Matters (University of California Press, 2007). He wrote the book both for those who already care about the topic and those who don’t. He does not disparage other musical forms, but instead makes an impassioned case for classical music on the basis of what it can be, mean and do.

“[The book’s] real concern is with the cultural role of classical music—what it was in the past, and what it may be in a world that has left behind most of the assumptions about mind, art and feeling on which the music was based,” Kramer said.

Classical music fires our imaginations by combining the expressive power of melody with narrative form, Kramer said. It creates scenarios in sound that resonate with important social and cultural scenarios, both past and present. It matters because of its power to project an acute sense of how those scenarios feel as they play out. The detail and directness with which the music does this are nearly unique—and far too valuable to be surrendered without a fight.

The last chapter of Kramer’s book discusses an example in which the author heard Bach being played by a violinist in the Times Square subway station while a small crowd stopped to listen.

“She drew the crowd,” he speculated, “not because there was a sudden surge of Bach lovers on the platform but because the music invited people to reorient themselves momentarily away from everyday concerns.”

The book connects this impulse to the history of attention, the character of modern urban life and the historical means by which music such as Bach’s commands cultural authority.

Kramer is currently working on two new book projects. He also continues to compose; his work was performed at Fordham in October and will be featured in a June 2009 concert in Vienna.

“My interest in the cultural history and function of classical music is a critical and scholarly one,” Kramer said. “As such, it can claim, in association with the work of valued colleagues in the field, to have demonstrably altered the landscape of understanding on the subject.”