skip to main content
Return to Fordham University
You are at:Home»Faculty Profiles»Professor Looks at Parish Shutdowns and Attachment to Sacred Places

On Oct. 12, 2004, the final Mass was celebrated at Our Lady of Mount Carmel in East Boston, before the Catholic parish was to be closed and sold by the Boston Archdiocese.

As the parishioners exited to the sounds of Ave Maria on the organ, a crash caught their attention. Behind them, a statue of the parish’s patroness, Our Lady of Mount Carmel, had fallen to the floor of its own accord and broken. 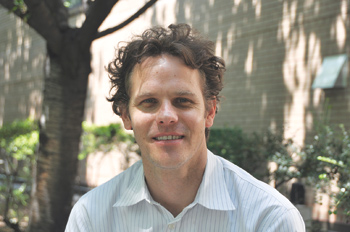 Was it simply faulty placement on the pedestal?

Or, as some believed, was it a sign from God that the parish should stay open?

The events that followed—one of laity moving against the church hierarchy—are at the heart of No Closure: Catholic Practice and Boston’s Parish Shutdowns (Harvard, 2011) by John C. Seitz, Ph.D., assistant professor of theology.

Seitz is a historian and ethnographer with an interest in Catholics’ connections to places and objects. He began the book as a doctoral student at Harvard during the early 2000s, when the Boston Archdiocese moved to close 82 of the area’s 357 parishes in the wake of its 2002 sexual abuse scandal. How, he wondered, would these Catholics deal with the loss of space, of place, in their religious lives?

When Seitz began visiting nine of the occupied churches, he realized there was a second, equally poignant question to explore.

Why, Seitz wondered, would Catholics risk being labeled as “backward resisters” in the universal Catholic Church by opposing their archdiocese’s closure decrees?

Over the next four years, Seitz addressed this question by conducting historical research and field studies through which he came to know resisting parishioners.

“Across the archdiocese, these parishioners had decided that their churches were worth protecting,” he said.

“They got their sleeping bags out, their rations of bottled water, their calling trees in place, and they changed the locks and moved into the parishes with 24-hour occupations that they called vigils—in the great Catholic tradition of nocturnal adoration of the Eucharist.”

But parishioners also held the deep belief, Seitz said, that they were living out their Catholic mission through these occupations; they believed, in fact, that they were advancing post-Vatican II church theology and ethos through their actions.

“The people had been encouraged, as a result of Vatican II, to embrace the idea that ‘This is your parish,’” Seitz said. “The statement—the church is the people of God—moves out from Vatican II. That phrase was often used to encourage parishioners to give. ‘This is your church, the church is you,’ and therefore you must keep it going.”

Additionally, older Catholics, many of whom were first-generation Americans, had a relationship to their parishes that was founded on the idea of the place’s uniqueness, its permanence, and its inviolability. Those Catholics continued to think of their churches as citadels and holy sites, Seitz said.

In the closure process, the archdiocese had to undermine these traditions, he said. Officials told parish members that these buildings were not, literally, their churches and that what Vatican II really referred to when it said “people of God” was a universal set of people within the Catholic faith.

Parish priests were even furnished with a special closing manual by the archdiocese. They were told to emphasize through prayers and readings that the church is larger than one particular parish, and to emphasize detachment from the material and the “mobility of sacred objects.”

“The archdiocese was claiming that church rituals are really about a sacred presence in people, not the building,” Seitz said.

Through his work, Seitz challenges the temptation to dismiss the resisters as backward holdovers or unreasonable rebels. He hopes the stories of the parishes also illuminate how people respond to loss.

“How do we decide what to hold on to and what to let go of?” he asked. “Detachment is not always the right choice. Some things are worth protecting.”

What eventually happened to Our Lady of Mount Carmel Parish?

The church is still occupied by the parishioners, Seitz said. They continue to identify themselves as Catholic and to hold communion with hosts secretly consecrated by sympathetic priests.