skip to main content
Return to Fordham University
You are at:Home»Inside Fordham»Professor Investigates the Pitfalls and Potentials of Outsourcing 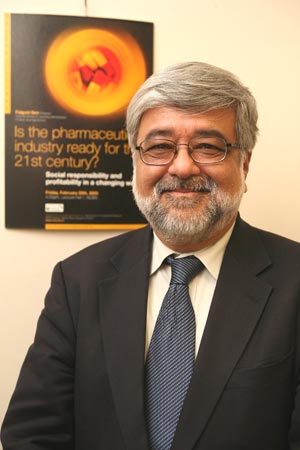 If a U.S. company hires a firm in India to create something simple, like a manhole cover, it doesn’t require much additional effort apart from a set of detailed instructions.

But what happens when that company tries to outsource something complex, like its call centers or human resources department?

That is a lot more problematic, according to Falguni Sen, Ph.D., professor of business at Fordham. Companies that have exhausted the savings they gained from sending manufacturing facilities overseas are inclined to send more complex tasks out of house, he explained.

Although legal and financial industries are among those aggressively exploring knowledge process outsourcing, Sen is particularly interested in the pharmaceutical industry, which is in a state of major flux.

“The industry is what we like to call ‘deverticalizing,’” he said. “It used to be a vertically integrated industry where firms did everything from discovery of the drug to clinical testing to pushing it into the marketplace.”

In many cases, drug discovery has been outsourced to firms in India and China, and the same is true for clinical trials, Sen said.

“Companies are using China’s and India’s capabilities at a lower cost to try to discover new drugs,” he explained. “Over 60 percent of clinical trials—even for competitive firms—have been outsourced to third party companies; they’re getting into all sorts of alliances.”

This new environment presents both opportunities and problems, as cultural differences make it easier to mistake one person’s recklessness for another’s pushing the envelope, Sen said. The withdrawal of the painkiller Vioxx from the market in 2004 showed how incomplete information can be distributed, and there are major ethical questions about testing new drugs in developing countries.

“No matter how much the FDA explains what the safety procedures are—and it’s very rigorous about getting Indian companies to follow every little part—there is subjectivity along the way,” he said.

“There is a trust that the subjective responses of individual decision makers are similar because they were educated similarly and they act from a similar sense of how much risk is too much,” he continued. “This shared background is difficult to transfer to another country.”

“In this new structure, are we going to get new therapies that are superior to prior therapies?” he asked. “Or is this industry going to move toward a model like the consumer goods industry, where companies do minor improvements to existing products because it’s easier to put them down the pipeline than new innovations?”

Outsourcing is about more than just American firms partnering with companies around the world. Cooperation between China and India, which is often referred to as “Chindia,” also interests Sen because those nations harbor a third of the world’s population. But the two countries have fought more than collaborated, so although the potential is huge, the obstacles are daunting.
“
My research is to identify theoretical possibilities, explore which are feasible, and then ask why the ones that look good aren’t happening,” he said. “I can get a sense of what the barriers and facilitators are and then make predictions about what changes I see taking place in the next 10 to 15 years,” he said.

Researching the pharmaceutical industry is a tricky undertaking, as it tends to protect data about its operations and views the opinions of outsiders with extreme skepticism. As an outsider, Sen said that several positions put forth by pharmaceutical companies sink to the level of myth-making.

“I don’t believe that single payer systems are inherently bad, and I actually feel that there is enough evidence to show that in the U.S., public hospitals are more efficient than private sector hospitals,” he said.

Another myth is that if drug prices are controlled, drug companies will stop innovating, Sen said. In his opinion, the level of innovation already is too low.

With restructuring continuing unabated, and the possibility of lawmakers initiating a reorganization of the healthcare system, Sen finds the industry’s partnerships with developing countries the perfect subject for a book.

“It’s all about boundaries and how to bridge them,” he said. “Where they get bridged, things succeed, and where they don’t, things fail.”

From his doctoral dissertation about how companies successfully move innovations from research into production, to his research on how companies reduce the number of suppliers and increase quality, business success boils down to a single issue: breaching cultural divides within organizations and between them.

“People are so complex, I don’t have a solution,” he said. “I can tell you in each case what the problem was, but can I create a general theory? We’ve made some progress; we’ve produced some knowledge about how to overcome barriers, but there’s still lots to be done.”