skip to main content
Return to Fordham University
You are at:Home»Inside Fordham»Professor Gleans God’s Truths from TV and Movies 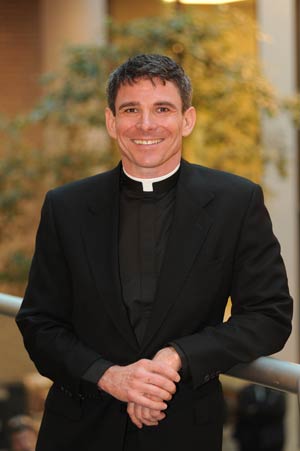 In his new book, Father Klein teaches the Gospel with a little help from Hollywood.
Photo by Chris Taggart

There is a moment in the movieBreakfast At Tiffany’s when the music rises and the camera zooms in on Holly Golightly (played by Audrey Hepburn) as she experiences an epiphany: she has fallen for the man who loves her, the man who is searching in the pouring rain for her lost cat. Through acting skill and a graceful visage, Hepburn opens herself to love on the screen like an unfolding flower.

It is a moment, according to Terrance Klein, S.T.D., when God is revealed on film.

Father Klein, associate professor of theology, said that the lives and work of movie and television stars can channel a Christian spirituality and illuminate the Gospel. Watching Hepburn act out a transformation with one look can teach someone all they need to know about grace, for example.

“Grace happens when you discover your place in the world, and something as big as that only occurs when someone as big as God steps in,” said Klein, who teaches fundamental theology. “[Hepburn] embodies the idea that grace is inside of us. The key [to finding God]is when we find our grace.”

There is some thought within the church, said Father Klein, that contemporary life and culture is squarely on the “path to Hell,” and that, to be spiritual, one must express a disdain for popular culture. Although Father Klein is a scholar of serious theology—he recently authored Wittgenstein and the Metaphysics of Grace (Oxford, 2007)—he enjoys using the Gossip Girl novels by Cecily von Ziegesar in theology lectures.

Tapping into popular media to teach about God, said Father Klein, benefits him as a professor and a priest.

“As priests, we have to produce a homily every week for Mass,” said Father Klein, who grew up in Kansas where, he said, there was plenty of time for TV, books and movies. “My preaching technique is that I start with a story; often on something I’ve read or seen, or something that has just happened, and then make my point.

“Sometimes, the Gospel needs a bit of an emotional wrapping,” he said.

For example, Father Klein’s lecture on sin and dissipation includes a reference to Gilligan’s Island. The castaways are so creative: the Howells build a golf course on the island; Mary Anne makes coconut pies with no oven; and the professor invents things with organic materials.

But the castaways are distracted just at the moment of rescue. Whether by a petty argument or too much luggage, their distractions ruin their chance for escape.

“They let their energies get dissipated,” said Father Klein, who explained that the sinner “allows piddling passions to subjugate the self.”

The saint, according to philosopher Søren Kierkegaard, is the person who can choose that one thing that is his or her calling.

While the stars that Father Klein cites in his book are hardly saintly, a few of them did see their calling clearly. He draws a comparison between actress and comedienne Lucille Ball and Teresa of Avila, the 16th century saint who founded 16 Carmelite orders across Spain. When Ball was in primary school, she left her classroom and began her “pilgrimage” toward what she thought was Manhattan. Teresa ran away from home at age seven with her brother Rodrigo, to convert Muslims in the south of Spain. Their caretakers retrieved the girls, but their missions remained with them.

As a seminarian, Father Klein struggled with his desire for the priesthood, although he was certain he wanted to be a teacher. Aspects of the priesthood that involved teaching, he said, were always his favorite.

In his role as spiritual director in the seminary, he brought up the movie The Trouble with Angels, in which a student (Hayley Mills) is ultimately inspired to choose the vocation by the very thing that chafes her—the Mother Superior (Rosalind Russell).

“I don’t know how many times I was ready to leave the seminary, and then I’d watch that film and decide to stay,” he said. “When I mentioned this to my brothers, they said, ‘Hey, me too.’ It had a profound effect on many priests who saw it.”

Vanity Faith prompts popular discussion while teaching theology: Did Jennifer Aniston experience a “Jeremiah” moment, where the promise of God seemed hollow? How does the life of alcoholic/addict Tallulah Bankhead illuminate the Trinity?

Unlike the sciences, which offer hard answers, the humanities are constantly arriving at truths, Father Klein said. That is why he likes stories.

“You can’t use a scientific methodology for a question like, ‘What is love?’ and yet it is a real question nonetheless,” Father Klein said.

And what God might want of us may be right there on the screen.

“The church has a role in promulgating truth, but television and movies can teach the rest of us, including the church, what it means to be human,” he said.