skip to main content
Return to Fordham University
You are at:Home»Colleges and Schools»Graduate School of Education»Professor Gauges How Spirituality Influences Teaching 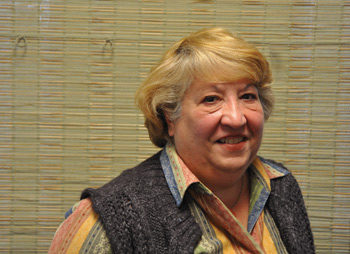 Giselle B. Esquivel, Psy.D., found that Fordham professors who were thought of as spiritual were also considered interpersonally sensitive and task-oriented. Photo by Gina Vergel

Giselle B. Esquivel, Psy.D., specializes in an area of psychology that did not exist when she began her career in 1982.

A professor in the Graduate School of Education’s Division of Psychological and Educational Services, Esquivel has done groundbreaking work in incorporating positive psychology into the field of school psychology.

While traditional mental health approaches in school psychology seek to alleviate social and emotional problems, positive psychology focuses on building resilience and enhancing the academic success and well-being of children. Esquivel has applied this framework to her studies of culturally and linguistically diverse children.

“Traditionally, psychologists have looked at immigrant children in terms of their problems or deficits as a result of being English language learners,” she said. Instead, Esquivel has studied the strengths of bilingual children in the areas of creativity, resiliency and cognitive flexibility. She is currently studying spirituality as a protective factor for immigrant adolescents at risk due to migration and acculturation stress.

Esquivel has extended her interest in spirituality to teaching in the context of higher education settings, with a focus on the relationship between faculty spirituality and style of teaching and interacting with students in the learning process.

“In psychology, we have historically neglected to consider constructs like hope, optimism, creativity, resiliency and forgiveness,” she said. “Psychologists are now looking at spirituality as an inherent aspect of human life. Spirituality doesn’t mean just religiosity. It also implies an inherent sense of a person to relate to a higher being, to search for meaning, and to discover aspects of life that are transcendental.”

Spirituality has been associated with a host of beneficial mental health outcomes, including reduced depression and higher self esteem. Yet its worth has been traditionally neglected in the context of education.

“There are a number of spirituality measures that don’t necessarily assess spirituality as an integral part of a person’s vocation,” Esquivel said.

She and Father Cecero hypothesized that spirituality would be a significant predictor of an effective teaching style, specifically one that is interpersonally sensitive and task-oriented.

“As a pilot study, we surveyed 345 students and asked them to think of a professor who had spiritual qualities and characteristics, and to describe those attributes. Then we derived categories of what it means to be a spiritual faculty member based on students’ perceptions, and used those categories to develop a faculty spirituality questionnaire,” she said.

In a larger study, students completed the questionnaire and a rating of teaching style along the dimensions of interpersonally sensitive, attractive (likeable) and task oriented.

The first, altruism, emphasizes nurturance and concern for students. Altruistic faculty members, Esquivel said, demonstrate compassion for others and care about students as people beyond what they are learning.

“They fall in with the Jesuit tradition of cura personalis,” she said.

The second, transcendence, applies to faculty members who have a personal relationship with a higher being and are dedicated to daily prayer and spiritual disciplines.

“They internalize a sense of transcendence to a higher-being relationship,” she said.

The third, curiosity, is “an attitude of openness to the idea that life is more than what can be gleaned from concrete reality,” Esquivel said.

The fourth, strength of temperance, is marked by self-control and humility in the context of care and concern for others.

The higher a faculty member’s spirituality score in those areas, Esquivel said, the higher he or she was rated by students to be both interpersonally sensitive and task-oriented.

“One did not preclude the other,” she said. “This means in talking to students about class materials or projects, these professors are sensitive to how they communicate. They care for their students. It’s a style of teaching and caring at the same time,” she said.

“They’re supportive of their student in their learning process. They don’t see it as one-sided. It’s a relationship where two people are learning together.”

Esquivel said the study enabled one to ask, “Can this teaching style be nurtured or taught?”

“Is it totally intrinsic or is it something that one can develop? How can the faculty member convey that interpersonal aspect of spirituality to students so that they can say, ‘I identify with this professor who is there not just to teach, but who really cares if I grow as a person,’” she said.

“Spirituality is not just for the individual; it develops a sense of community. I go back to that Jesuit tradition of educating the person for others in a caring learning environment, although this is more than a religious concept,” she said.

Next, Esquivel will coordinate with Father Cecero to conduct validation studies of the faculty spirituality measure.

“We will be looking at it in terms of generativity,” Esquivel said. “We want to know, as a mentor or faculty member, how does your spirituality relate to your purpose in fostering a sense of professional and personal meaning in students as the new generation?”