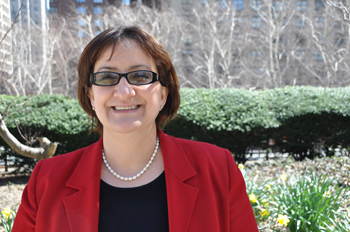 Claudia Moreno, Ph.D., recalls her reaction when she was asked to help research HIV-positive Latinas more than 15 years ago.

“I thought, ‘I don’t know anything about HIV,’” said Moreno, then a specialist in developmental disabilities and autism. “But I am bilingual and they needed the help, so I went—and was instantly fascinated by the women’s stories.”

Moreno, an associate professor in the Graduate School of Social Service, shifted her focus to how HIV affects Latinas. Today, she is working to develop the first prevention intervention program specifically for Latinas.

“I have collaborated with researchers across the country to culturally adapt other interventions for Latinas, but we don’t have anything that’s our own,” Moreno said, “and it’s sorely needed.”

Moreno is testing mainly Puerto Rican, Mexican and Dominican women between the ages of 18 and 29 in the New York/New Jersey area. She has recruited women who work or shop at neighborhood beauty salons and bodegas.

When Moreno began working in HIV research, she was a “minority” in terms of wanting to focus on the heterosexual community. “Back then, all the research was guided toward the gay community,” she said.

That changed when HIV cases in the heterosexual community—particularly those in minority groups—began to climb.

Moreno was part of a team of researchers that developed Project CONNECT, an intervention for heterosexual couples who are at risk for HIV. As part of the project, she worked with couples together and also with women on their own.

In 2004, she was asked by the Centers for Disease Control and Prevetion to alter an HIV intervention titled Sisters Informing Sisters on Topics about AIDS (SISTA) by changing the cultural focus from African-American women to Latinas.

SISTA is culturally and gender-relevant intervention designed to increase condom use. Five peer-led group sessions focus on ethnic and gender pride, HIV knowledge and skills training around sexual risk-reduction behaviors and decision-making. The intervention is based on social learning theory as well as the theory of gender and power.

“What is nice about SISTA is that it talks about empowering women in several ways,” Moreno said. “But Latinas are very different than African-American women because of issues of machismo, marianismo and other cultural norms. And obviously, not all Latinas are the same.

“In many instances, we know the risk factors for specific communities. But Latinas—regardless of country of origin—have different levels of empowerment. This is why we have to empower women at different levels—and design interventions that have different messages—for them to avoid the risk of infection.”

That Latinas differ has nothing to do with their country of origin, Moreno said.

“You can be a very empowered woman who came yesterday from Latin America and—because you’re educated—you feel more empowered versus a woman who is poor, not educated and has been in the United States for 30 years,” she said.

Latinas differ from their African-American and Caucasian counterparts in that they may face obstacles of machismo, which refers to masculinity and male-identified social roles. As an attitude, machismo ranges from a personal sense of virility to extreme male chauvinism. The frequency and type of sexual activity are most often determined by men, leaving women in fear of violence or abandonment if they resist male sexual advances. Machismo may also be used as an excuse for unprotected sex.

Other Latinas deal with marianismo, the cultural expectation for them to be modest, pure, dependent, docile and abstinent until marriage. This can act as an obstacle to HIV prevention efforts because traditional Latino families often expect women to remain virgins until their weddings. This often puts women under pressure to engage in risky alternatives to heterosexual intercourse.

The stigma that is attached to female sexuality often prevents sexually active women from accessing reproductive and sexual health services, screening and information. The silencing of Latinas’ sexuality makes them less comfortable and less successful in condom negotiation, putting them at a higher risk of HIV infection.

“Because of these reasons, we tend to think in Latin America that men are the ones who have sex outside of their relationship. Women do it, too, but don’t talk about it,” Moreno said. “I’ve noticed women tend to minimize the number of partners they have had when interviewed in a group. If you’re doing interventions, sometimes one-on-one interviews work better.”

Much of these norms originate in the messages that young women hear at home, Moreno explained.

“For boys, the more women you have, the more macho you are. For girls, parents don’t talk to them about sex or tell them, ‘Don’t have sex,’” she said.

The result, Moreno said, is that young Latinos and Latinas are having sex at a younger age and are not prepared to use their sexuality in a way that prevents infection with HIV or other sexually transmitted diseases.

“I have seen the differences in non-Latino groups. For example, when empowered youngsters want to have sex, they will ask for a prospective partner’s sexual history. Theywill negotiate condoms,” she said. “A lot of Latinas don’t even know how touse a condom, or maybe feel shame in getting one, or even worse, not willing to risk their mother finding it among their belongings.”

Moreno will keep all of these differences in mind when developing an intervention for Latinas, including a special curriculum for women who are victims of intimate partner violence (IPV). As she has in the past, Moreno plans to bring her findings to agencies in the hope that they implement her strategies.

“I consider it research-in-action,” she said. “I’m a Latina, and I want these findings to not just remain in a journal, but to actually serve the community.”