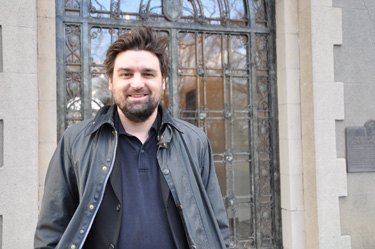 John Bugg, Ph.D., is working to fill a glaring gap in the history one of London’s most influential 18th-century booksellers.

Bugg, an assistant professor of English at Fordham College at Rose Hill, is putting together the first edition of the letters of Joseph Johnson, a Romantic-era publisher and book dealer.

Johnson, who published books in more fields than any other publisher of his time, had a bookstore in downtown London that was a gathering place for writers and artists. He was an advocate for many writers who would not otherwise have received support because their works sometimes were considered radical or controversial. Johnson’s authors included writer, philosopher and feminist Mary Wollstonecraft and other major writers of the period, such as William Blake, Charlotte Smith and William Wordsworth.

“A lot of the Romantic-era writers who have made it into our literary anthologies got their initial encouragement, first publications, and general advocacy through Joseph Johnson,” Bugg said. “He was a one-person cultural machine at the center of the British Romantic movement.”

Although nearly every giant of the late-18th and early 19th century in medicine, science, religion, philosophy, political thought, education and poetry published at least one work with Johnson, few details are known about the history of his book trade. In fact, the author of a Johnson biography published in the late 1970s experienced difficulty writing the book due to the apparent disappearance of Johnson’s correspondence, Bugg said.

“For a long time, people included Johnson in their studies of Romanticism as a kind of relay figure among writers, but these reports are necessarily limited because a lot of the manuscript materials related to his work as a publisher and bookseller have been lost,” Bugg said.

In the mid-1990s, however, a leather-bound collection of Johnson’s outgoing manuscript letters appeared for sale at an antiquarian bookshop in London. The trove was purchased by the New York Public Library and is housed in the Carl H. Pforzheimer Collection of Shelley and His Circle, one of the world’s leading repositories for the study of English Romanticism.

Bugg is putting together a scholarly edition of Johnson’s correspondence based on the leather-bound collection, which contains 204 of the publisher’s letters.

“I’ve transcribed them and now I’m starting the work of editing each of the letters, which means tracking down all of these figures from the 18th- and 19th-century book trade, many of whom are lost to history,” he said. “It’s the shadowy figures in the world of the book trade that are tough to trace—trying to find out, when Johnson refers to a ‘Mr. Baxter,’ just who Mr. Baxter is and why he wants 80 copies of the poems of Cowper.” Bugg added that this detective work is equal parts painstaking and exciting.

“The field of book history has been blossoming for several years. There are many resources to which you can turn,” he said. “But even if you do find a ‘Mr. Baxter,’ the way the book trade worked is that Mr. Baxter’s father and cousins and so on would have been involved with him and they would all be named ‘Mr. Baxter’ as well. So even then, it’s a challenge to sort out precisely who Johnson is talking about in each case.”

Some of Johnson’s letters are about day-to-day business matters, such as how much paper to order or where to get the paper from—details useful to those interested in the book trade history.

“Other letters are to writers that we all work on, like Charlotte Turner Smith and Maria Edgeworth, which will be of interest to literary scholars,” Bugg said. “Because he was publishing their books, the letters deal with the specifics and even marketing of whichever book was about to come out, including basic issues such as, ‘Can we change the title from this to that?’”

“We have the finished volumes in libraries today, but we don’t see all of the hard work that went into shaping them and strategizing about their publication.”

Bugg estimates that the 204 letters at the Pforzheimer likely make up 10 percent of Johnson’s total correspondence at most—the rest of which has yet to surface. For the edition he is compiling, he will include a dozen or so additional letters written to Johnson by the authors with whom he worked. “These letters have survived in various international archives. They give a sense of what we call the Johnson circle—all of his writers and fellow booksellers,” he said.

Bugg did not at first set out to research Joseph Johnson specifically. He found the topic while working on a dissertation at Princeton about 1790s literary culture and political repression.

“So many people were afraid to publish any sort of politically engaged writing, so I turned to manuscripts and unpublished works, letters and diaries and journals, to see the kinds of things people were writing about that they weren’t willing to go public with,” Bugg said. “I was doing a lot of research in England and North America … and it led me to Johnson’s letter book. I thought it was fantastic.”