skip to main content
Return to Fordham University
You are at:Home»Inside Fordham»Priest and Student Focuses His Research on Peace Education 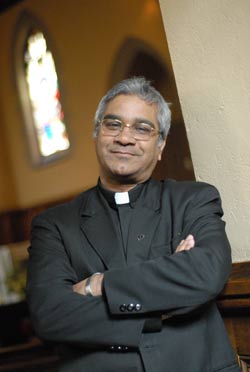 It’s a long way from northeast India to the Bronx, but Rev. Emmanuel Babu Kallarackal, C.S.C., has spanned the distance gracefully in his five years at Fordham University.

A priest in the Congregation of Holy Cross who works as a missionary in Tripura, India, he first came to New York in 1994 to earn a Ph.D. in education and church leadership. He’d heard about Fordham University while studying at St. Joseph’s College in Bangalore, India, and when an opportunity arose to study in the United States, Father Kallarackal took it.

After completing an advanced professional diploma in religious education, however, he was called back to India and took a leave of absence from the University. Father Kallarackal intended to return to Fordham sooner than he did, but it wasn’t until early 2004 that he was able to do so. Three years later, he will receive his Ph.D. from the Graduate School of Religion and Religious Education with a focus on peace education in multiethnic settings.

It was during his first stint at Fordham that he discovered a serious interest in peace studies. “As a priest, of course, I preached about peace,” he said. “These ideas were deeply ingrained in me.” But it was a course in peace and justice at Fordham that prompted Father Kallarackal to apply those ideas to his work in India.

Living and ministering to the people in the midst of ethnic and communal violence in northeast India challenged Father Kallarackal’s religious community to think about what, besides prayer, they could do to promote peace in a multiethnic region where tribal and nontribal relations are often fractious. The North Eastern Students National Integration Movement (NESNIM) program was born. It was this effort to bring together hostile youth for five days of classes, games and cultural activities that formed the basis of Father Kallarackal’s dissertation.

More then 2,300 students went through the program, which lasted five years. In the process, Father Kallarackal said, some of them were changed, shedding prejudices and learning to appreciate the cultures of others. “It is not a panacea for violence everywhere,” he said, “but it contributes to peace.”

In addition to piquing his interest in peace, Fordham served to introduce him to people of many cultures and backgrounds, he said, as well as provided him many opportunities for pastoral fulfillment.

Now this priest who uses words like “inspiring,” “cordial,” “caring” and “trusting” to describe his professors at Fordham, will take back all that he has learned to his homeland. He intends to return to India after publishing his dissertation and doing another year of research in New York City.

His education at Fordham, he said, “has been a process of spiritual and intellectual renewal. It has helped me to clarify some of my ideas and get new ideas. It has broadened my own outlook, increased my respect for others and equipped me for my future educational ministry in India.”