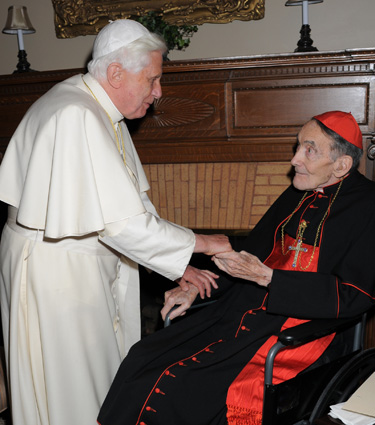 Pope Benedict XVI made news on his first apostolic trip to the United States, from April 15 to 20, especially in his ecumenical outreach, his visit to a Manhattan synagogue on the eve of Passover, his comments on the sex abuse scandal that has rocked the church, and for his meeting with victims of abuse.

“It has overshadowed the trip,” Joseph M. McShane, S.J., president of Fordham, told The New York Times, referring to the Pope’s comments on abuse. “None of us expected it, but everyone is grateful that he did. What he realized is that this is a pastoral visit and he must be pastor to those who are hurt most—and that is the victims.”

Not as widely reported was the Pope’s meeting with Avery Cardinal Dulles during the Pontiff’s visit to St. Joseph’s Seminary (Dunwoodie), in Yonkers, N.Y., on April 19.

Cardinal Dulles presented the Pope with a copy of his book Church and Society: The Laurence J. McGinley Lectures, 1988-2007(Fordham University Press, 2008).

Father McShane attended a luncheon with William Joseph Cardinal Levada, Prefect of the Congregation for the Doctrine of the Faith, sponsored by Time magazine. 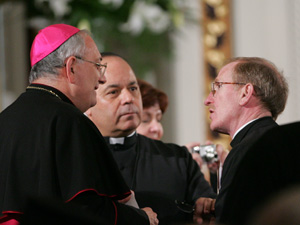 Bishop Nicholas DiMarzio (GSS ’80), of Brooklyn, at left, with the Rev. Robert Aufieri, head of ecumenical affairs for the Archdiocese of New York, and Joseph M. McShane, S.J., president of Fordham, at St. Joseph’s Church in Yorkville, Manhattan

Other Fordham faculty, staff and students took part in a number of activities during the Pope’s visit, including Masses at St. Patrick’s Cathedral and Yankee Stadium, his meetings with Catholic youth, and the departure ceremony at John F. Kennedy Airport. Amy Uelmen, director of Fordham Law’s Institute on Religion, Law & Lawyer’s Work, gave a reading at the ecumenical gathering at St. Joseph’s.

“I was deeply touched by the reading that had been selected, from Ephesians 4:1-6, which urges us to ‘live in a manner worthy of the call you have received, with all humility and gentleness, with patience, bearing with one another through love, striving to preserve the spirit of unity through the bond of peace,’” Uelman said.

“The Pope’s own presence at this event and at all of the events in our city, was for me a living example of this gentleness, love and capacity to reach out to build promising bridges across so many of our differences,” she added.

Members of the Jesuit community at Fordham attended the Solemn Pontifical Mass for Priests, Deacons and Religious at the Cathedral of Saint Patrick in Manhattan on Saturday. Also on Saturday, 75 Fordham student volunteers assisted at the Pope’s meetings with disabled children and youth seminarians at Dunwoodie. On Sunday, April 20, 35 Fordham student volunteers assisted outside Yankee Stadium at the Solemn Pontifical Mass.