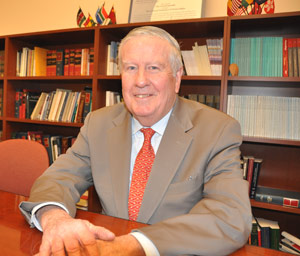 John D. Feerick, the Sidney C. Norris Professor of Law, is leading the fight to ensure that the poor have protection in America’s courtrooms and corridors of power.

In the nearly four years since his namesake Feerick Center for Social Justice and Dispute Resolution opened, it has focused on protecting the underprivileged from a wide array of social ills-including homelessness, bankruptcy and deceptive advertising-while working to bolster workers’ rights and access to legal services.

For Feerick, who was dean of Fordham Law from 1982 to 2002 and director of the center since its inception, his efforts are all part of a natural inclination to make a positive difference in the world.

Even as a junior in Fordham College at Rose Hill, from which he graduated in 1958, Feerick recalled the thrill he felt at helping to create a new alumni directory and student government handbook.

“Wherever opportunities presented themselves to make some small difference, I found that empowering,” he said. “I’ve never been able to define any theme in my life other than a need to make some difference.”

Feerick proved long ago that he could make an impact when he served on the task force that created the Twenty-Fifth Amendment to the Constitution, ratified in 1967, which outlines the succession to the presidency.

The desire to help, he said, is embraced throughout the Feerick Center. Its mission has always been to provide Fordham Law students with opportunities to work on cutting-edge legal issues pertaining to the poor and underrepresented. While a great deal of that involves assisting homeless families, it has led to unexpected and innovative legal arenas.

For instance, the Feerick Center was tapped by the U.S. Conference of Catholic Bishops, Catholic Health Association of the U.S. and organized labor leaders to manage a national dialogue about workers’ rights. The idea was to lay the groundwork for a fair process that workers at Catholic health care institutions could use to decide whether to form a union. The result of the dialogue, which lasted two years, was published last June.

“We were asked to be the facilitators, to see if the parties could agree on an overarching document dealing with workers’ rights that would be a more tangible expression of the encyclicals of the Catholic Church dealing with workers’ rights,” Feerick said. “Obviously it’s a document that came out of the parties, but they all acknowledged the work of our collective group.”

Another recent accomplishment, the creation of “attorney emeritus” status in the New York state court system so that older lawyers may do pro bono work, has been on Feerick’s agenda since before the center opened. Thanks to Fern Schair, chair of the center’s advisory board, an effort is underway to recruit from the 30,000 to 50,000 lawyers who are planning to retire or already have left the bar.

After examining programs in 25 states that assist senior lawyers, Feerick, who praised Fern’s work with students on the program, said the new program addresses older lawyers’ most pressing questions, including:

• As a retired attorney, I don’t have any malpractice insurance, so what happens if someone sues me?

• I don’t know anything about this area of law, so how can I volunteer, since it would require me to know more to practice effectively?

“The new program takes care of malpractice insurance and provides all kinds of training and opportunities for volunteer lawyers,” Feerick said.

Homelessness has been a major area of concern, particularly since 2002, when Feerick served on the special master panel that helped broker agreements between the City of New York, Department of Homeless Services and the Legal Aid Society, which led to more instances of family homelessness being addressed outside the court system.

The center’s Consumer Law Advocates program, which has offices in the Bronx and Manhattan and is overseen by Dora Galacatos, adjunct professor of law and senior counsel to the center, and Robert J. Reilly, assistant dean of Fordham Law, has been helping people avoid homelessness altogether by providing debt counseling. Feerick estimates that the center has counseled between 700 and 1,000 people.

“There are hundreds of thousands-and that’s not an exaggerated number-of cases of poor people who are being sued by creditors or companies that have bought debt from others,” he said. “Roughly 80 percent of these people have no counsel.”

With so many areas of need on which to focus, Feerick acknowledges that the center will never be without work. It helps that it has a finely tuned process to decide where to direct its efforts.

“It’s clearly overwhelming in one sense. But it’s not unlike life itself. You have to make choices. You can’t let something that’s overwhelming overwhelm you, so as to immobilize you from living,” he said.

For himself, Feerick is looking forward to working on a volume of family history, as well as updating both of his books with the help of his wife, Emalie, who he said has been a sounding board for all of his writing.

“I’ve been at government reform for almost 50 years. I started off with involvement with a constitutional amendment, and it ended with a very difficult 22 months in Albany,” he said. “But life sometimes is like a roller coaster, and you’ve got to be able to ride it.”