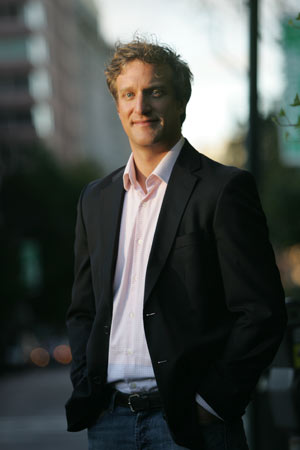 Joachim Rennstich, Ph.D., assistant professor of political science, was among the million or so consumers who bought the much-touted Apple iPhone this summer.

“I love this thing,” Rennstich said. “I can do everything on it. I love technology and all kinds of gadgets. In fact, I’m convinced that technology is very much the future of teaching.”

For Rennstich, that future is now.
The 36-year-old professor keeps a virtual office via a blog and records many of his lectures and distributed them though Apple’s popular online media playing software, iTunes, as podcasts—digital media files distributed over the Internet that can be played on portable media players and computers.

Immersing himself in the latest technology is not merely personal interest, however, but a professional concern. An expert in global economics and international relations, he is writing a book on the emergence of what he refers to as the “iGeneration.”

“The iGeneration is a digital generation that consists of two cohorts so far: the first, my own, starting in the late 1960s and early 1970s and the second starting 25 years later, roughly around the 1990s,” Rennstich said. “This is part of big theory in international relations, which is my branch of political science. I’m trying to push the field into a new framework.”

Rennstich’s interest in the iGenerations began when he was working on his dissertation about globalization. In order to understand the evolving structure of globalization, Rennstich applied an evolutionary approach, putting the changes into a historical context, using past trends and trajectories to evaluate current changes.

By applying an evolutionary approach, Rennstich has sought to understand the role of the iGeneration in a globalized environment.

So what has Rennstich found so far? “Technology changes, its impact doesn’t,” he said.

“Technology changes the entire game, but not the rules of the game. What doesn’t change are humans and how they use the technology, whether digital or not.”

Rennstich is convinced, based on his research, that the ebbs and flows of war and peace or economic boom or bust aren’t any different because of today’s ever faster and more powerful technology.

“If I follow the rules of complex systems, certain things emerge in a repetitive pattern—clashes of states, new leaders emerging,” he said. “But how does this evolutionary stuff work? We need a better understanding of the ages.”

And that is what Rennstich is seeking to do. He has proposed a theoretical framework for understanding technological development and globalization that draws on what is known as the Buddenbrook Cycle, which is based on a Thomas Mann novel about four generations of a merchant family in Germany.

In the cycle, the first generation establishes the foundation for a new set of innovations through a “new way of doing things.” The second generation, having been reared in that new environment, pushes the level of innovation to new heights.

The third generation, however, gets locked into doing things the way they have been done before and is unable to adapt, falling victim to the “Buddenbrook way.”

“The very formula that bred much of the success in the first two generations eventually proves to be a major obstacle as the world around them changes and the previous innovators remain stuck in the now old ways,’” Rennstich said.

What Rennstich has done is move the Buddenbrook model out of the realm of individual families and placed it squarely in the sphere of societal and even global movements, especially as it relates to technology.

For Rennstich, the iPod, the digital music player, is a case in point.

“The first generation that invented the iPod encountered feedback like ‘You’re crazy. Who wants to spend all that money on that?’” Rennstich said. “The second generation was the one who discovered the iPod as a nifty gadget and improved it. The third generation, of which my students are part of, all have one and they are stuck in this paradigm.”

In fact, he describes many of his students as “pure users” of technology, completely at home with such things text messaging and e-mail.

“But using a word processor, built by people who were brought up using computers via programming, is something many of them have only mastered on a very rudimentary basis,” he said. “Three-quarters of them have no idea how to use tabs or how to insert a page break. Half of them don’t know how to insert page numbers or any other basic word-processing features.

“So the supposedly tech-savvy generation is anything but,” he said, “because technology is usually built and designed by older folks who were brought up in a different technology regime.”

In the spring, Rennstich intends to take on some of these ideas with Fordham undergraduates when he teaches the course “Understanding the Global Economy.”

Not surprisingly, his students will get plenty of exposure to technology. He has been working with Fordham IT to loan each of his student an iPod Touch, a media player with a touch screen.

For Rennstich, tapping technology is simply the future of education and all part of the deep currents of generational and global change.

“My students will be able to research material on their iPods, read and work on assignments, communicate with each other via Facebook and watch material on YouTube with restricted access to protect copyrights and the privacy of the interviewed persons,” Rennstich said. “To me, that’s the future textbook—right here, right now.”