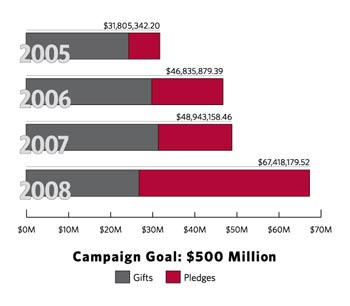 Fordham raised a record $67.4 million in gifts and new pledges in the fiscal year ending June 30, 2008, an increase of 39 percent over the previous fiscal year, setting the stage for a the public launch of the capital campaign in June 2009.

The $500 million campaign, still in its quiet phase, has raised $209.6 million to date, of which $51.3 million has come from members of the University’s Board of Trustees.

“Very simply, this is Fordham’s Time,” said Joseph M. McShane, S.J., president of the University. “At this moment we are poised not to make the University a better version of what we were, but to effect a transformation that will touch every aspect of a Fordham education. Through the campaign, we will build the faculty, infrastructure and scholarship endowment to place Fordham among the top tier of national universities.

“That goal, I believe, is an appropriately ambitious one, and there are plenty of signs that we are on the right path,” Father McShane said. “Fordham’s three years in a row of record fundraising and our steady climb in national rankings are recognition that the transformation has already begun. I also cannot say often enough, nor emphatically enough, that these changes are due to the sustained hard work of hundreds of devoted faculty, students and staff. Even the best strategic plan would be worthless without the exemplary effort and dedication of the Fordham community.”

The campaign is spearheaded by volunteers, most of whom are members of the Board of Trustees. James E. Buckman, Esq. (FCRH ’66), and John P. Kehoe (FCLC ’85, FCRH ’60) are co-chairs of the Board’s Development and University Relations Committee, which oversees the campaign.

“Volunteers are critical to the Campaign,” Buckman said. “Their role is threefold, I think: to demonstrate leadership with their own financial commitment to the campaign; to actively lead the solicitation efforts by identifying people who can provide substantive support to the University, and aid in soliciting donations from them; and in helping other core volunteers in the overall fundraising effort.”

Buckman also said that alumni who are themselves significant contributors have an edge in recruiting donors. “Having given themselves, they are confident in expressing their commitment to the campaign.”

The University will also call on the campus community to support the campaign, including faculty.

“We know, as faculty, that the money for our programs, for new facilities, for research, has to come from somewhere, but we may be a little uneasy with the fund raising process,” said Stephen Freedman, Ph.D., Fordham’s senior vice president/chief academic officer and professor of natural science. “But if the University is to build upon its wonderful academic reputation, enrich its academic programs and invest in its faculty, then our active participation in the capital campaign is both wise and necessary. At this moment Fordham has the opportunity to create a lasting academic legacy. I believe we can assume a position of leadership, not just among Catholic institutions, but among the top tier of American universities. And I believe the Fordham faculty will rise to the challenge.”

Fordham’s School of Law has had two record-breaking fundraising years in a row, and formally launches its $100 million campaign this fall, the centerpiece of which is fundraising for a new Law School building.

“In addition to the new building, this fundraising effort will also allow us to strengthen academic programs and to raise funds for endowed chairs, scholarships, and new initiatives,” said William Michael Treanor, dean of the Law School. “We recognize that this is an ambitious goal, but the recent increase in support from our alumni makes it an achievable one. In a short period of time, the Law School has gone from raising $4 million per year to $16 million per year, the amount we raised last year. That level of alumni support makes us confident that we have a strong foundation to build on. We believe that our alumni are dedicated to ensuring that Fordham School of Law will continue to fulfill its mission of providing a complete legal education–one that combines excellence in substantive areas of the law and the craft of lawyering, a focus on ethics, and a commitment to public service–and that they will generously provide the financial resources that fulfilling that mission requires.”

This year’s goal for the overall campaign is $75 million, according to Al Checcio, vice president for development and university relations. “Given the enthusiastic response to date from our donors, we believe that goal is not only reachable, but will put us in an excellent position to launch the public phase of the campaign,” Checcio said. “A convenient rule of thumb for capital campaigns is that you want to have raised half of the overall target before making a public announcement. Raising $75 million this year will put us comfortably past the halfway point by June.”

Last year the University received a dozen gifts and pledges of $1 million or more, with trustee giving just over 50 percent of the $100 million goal. More than 40 volunteers joined the Campaign Volunteer Leadership Committee, and the University saw increases across the board in all major gift categories.

“This campaign is really a transformative event,” Buckman said. “The University badly needs to invest in buildings at Rose Hill and Lincoln Center, in faculty and academic programs, and in financial support for students. From the responses we’ve had to date from donors, we’re feeling very confident about the campaign. Despite the recent instability in the economy, there is a lot of pent up support for Fordham.”