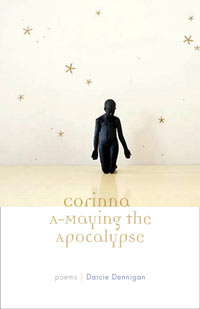 Poets Out Loud (POL) hosted a book launch and reading on March 5 for poet Darcie Dennigan, winner of its 2006-07 POL Prize for a previously unpublished volume of poetry. Dennigan was on hand to read from her volume Corinna A-Maying the Apocalypse, published by Fordham University Press.

“It’s not difficult for me to imagine how Darcie Dennigan’s work stood out,” said Elizabeth Frost, Ph.D., associate professor of English and director of POL. “I have never encountered such a wonderfully quirky poetic imagination, and I’m certain that hers will be a major new poetic voice.”

Dennigan’s manuscript was chosen from among 500 entries from across the country and Europe by contest judge Alice Fulton, poet, author and the Ann S. Bowers Distinguished Professor of English at Cornell University. In introducing Dennigan, Fulton called her a “powerfully original poet—one whose idiosyncratic power could not be learned or taught.”

Dennigan is the eighth recipient of the award. POL’s 2007-08 contest winner is expected to be named in April; this year’s judge is author and poet Michael Palmer.

Winners receive a $2,000 stipend, publication by Fordham University Press and a reading at the Lincoln Center campus as part of POL’s yearly series.