skip to main content
Return to Fordham University
You are at:Home»Inside Fordham»Poetry’s Seed Takes Root and Grows at Fordham 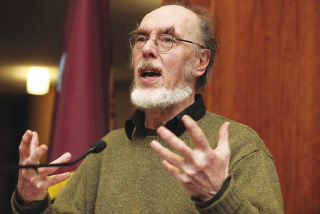 Eamon Grennan treats the Poets Out Loud audience to a selection of his work in 2010.
Photo by Michael Dames

Frank Boyle, Ph.D., explained that it all started in the classroom.

The associate professor of English was teaching the 17th- and 18th-century poetry of Milton, Pope, Swift and Finch in 1992 when some of his students began rendering their own poems—often surreptitiously.

“I would find one ‘accidentally’ included at the back of a term paper,” he recalled. “When I would ask about it, my students told me that Fordham didn’t have anyone teaching contemporary poetry.”

Boyle then got an idea. He reserved space in Pope Auditorium (which he devilishly rebranded “Alexander Pope Auditorium”) for one evening and brought in New York poet Kenneth Koch to give a reading for students and faculty.

That was the official birth of Poets Out Loud (POL), an organization that has brought nearly 300 poets to read on campus and has awarded book prizes to 12 authors.

Numerous people have helped to build POL from a grassroots reading series into the far-reaching program it is today—former adjunct faculty member Scott Hightower, said Boyle, was a leader in getting the program permanency and setting up a Fordham poet in residence.

Contributions came from others too, such as Associate Dean Cira Vernazza, the late poet Chris Hewitt and even Pulitzer Prize winner Gwendolyn Brooks, who, by virtue of giving a reading in 1993, helped raise POL’s profile.

But it has taken a special brand of dedication on the part of Boyle and English department faculty members Elisabeth Frost, Ph.D., and Heather Dubrow, Ph.D., to juggle all of the program’s parts successfully.

On Oct. 27, POL celebrated its 20th anniversary with a public reading by J.D. McClatchy and Julie Sheehan at the Rubinstein Atrium of Lincoln Center at 62nd street and Columbus Avenue. 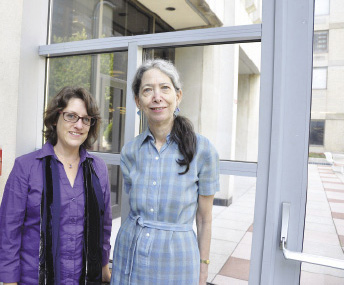 Elisabeth Frost, Ph.D. (left), and Heather Dubrow, Ph.D., are in charge of the various aspects of Poets Out Loud.
Photo by Janet Sassi

It was a fitting location for such an event, Frost said.

“For years, poetry readings did not exist at Lincoln Center for the Performing Arts and the Upper West Side was not a strong poetry location,” Frost said. “Filling that void was one of the missions behind forming POL.”

When Boyle was named chair of the Department of English in 1998, Frost—then a new faculty member—took over the burgeoning program. Over the next decade, she grew the program to six public readings a year, solidifying POL’s reputation as a series that balances emerging and established writers.

In 1999, Frost raised POL’s profile to a national level by establishing the annual POL prize. The competition attracts renowned poets and leads to publication of a full-length poetry manuscript through Fordham University Press.

A published poet herself, Frost was aware of the difficulties of publishing poetry beyond a first book, when poets, she said, reach a “gray area” in their careers.

“You see many contests for first books of poetry, but publishers don’t stay with a poet,” she said. “The POL Prize is open to writers at any stage of their careers.”

That flexibility worked for poet Janet Kaplan, a previously published poet who applied after seeing the POL contest advertised in Poets & Writers magazine.

“I’m the POL success story,” said Kaplan, whose second book, The Glazier’s Country, won the 2002 POL prize. She then was given a four-year appointment as Fordham’s poet-in-residence.

“My career changed as a result of POL,” said Kaplan, now a faculty member at Hofstra University. “Teaching at Fordham, working as a reader for POL contests and doing performances has all enhanced my own writing a thousand fold.”

Kaplan was part of a new renaissance in Fordham’s Department of English that has seen the creation of a vital creative writing department, in part inspired by POL’s popularity. Mary Bly, Ph.D., a professor of English and widely published author under the pen name Eloisa James, directed the program for several years, handing it off in 2009 to poet Sarah Gambito, the English department’s first tenure-track faculty member in creative writing and director of the program.

In 2009, Fordham also created a second POL directorship. The POL reading series is directed now by Dubrow, an accomplished poet and scholar who is Fordham’s John D. Boyd, S.J., Chair in Poetic Imagination. Frost continues to serve as the editor of the POL book prize, which has expanded from one to two winners annually.

In line with Fordham’s Jesuit mission, Dubrow has expanded POL’s reach to high schools in underserved communities, such as Cristo Rey in Harlem and the High School for Arts and Business in Queens. On the night of a POL reading, the high school students attend a poetry workshop/discussion with graduate students from the Department of English and the poets themselves.

“We are helping fight the poetry wars by fighting against them,” Dubrow said. “We react against the notion that there is really only one good type of poetry.”

Between the strengthening curriculum, growing attendance, innovative programming and the rise in POL’s off-campus profile, POL and Fordham had much to celebrate on Oct. 27.

Within the teaching of literature at Fordham, said Frost, poetry has become “absolutely integral.”

The largest beneficiaries? The students, many of whom hear poetry for the first time in the 12th-floor Lounge on Fordham’s Lincoln Center campus.

“For them, poetry might have been something they saw in a Norton Anthology, perhaps something composed before they were born,” she said. “Thanks to POL, our students can see poetry as a living art.”