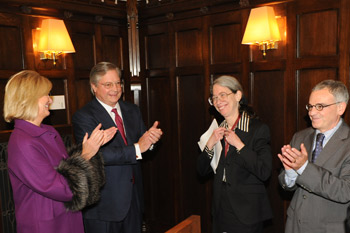 Heather Dubrow, Ph.D., a literary critic and scholar who specializes in temporality and spatiality in lyric poetry, was installed on Oct. 21 as the John D. Boyd, S.J., Chair in Poetic Imagination.

The chair was made possible through a gift from Stephen E. Bepler (FCRH ’64) and Kim Bepler, to honor the legacy of Father Boyd, who taught at Fordham for nearly three decades. Father Boyd was a distinguished scholar and teacher whose work focused on the poetic imagination and its relationship to life.

“His was the third class I ever took at Fordham,” Stephen Bepler said. “He loved to teach. He made everything interesting, which is such an important and rare quality in an educator.”

Dubrow received a medal and citation marking her new position at a ceremony in Duane Library on Fordham’s Rose Hill campus.

“As educators we are entrusted with helping our students build paths from the present to the future, and, like King Henry V, we are modeling values,” Dubrow said. “I believe passionately that we have a responsibility and, yes, a mission to help students open doors—in the sense of considering a range of majors, developing a range of interests and preparing for a range of opportunities, vocational and otherwise.”

Joseph M. McShane, S.J., president of Fordham, thanked the Beplers for helping to bring the eminent scholar to Fordham.

“They have sparked a Renaissance here at Fordham,” Father McShane said. “They are Fordham’s most generous, and quietly generous, benefactors.”

Dubrow, the author of six scholarly books, gave the Boyd Chair’s inaugural lecture, “And I feel now the future in the instant: Futurity in Shakespeare, Donne, Heaney and Dealy Hall.”

“Second, these assertions of agency involve language—and especially a crafty and crafted slippage—between and among types of speech that echoes and establishes slippages in temporalities.”

Thus, Dubrow explained, such texts typically rewrite the history of the past when ostensibly scripting the future.

For instance, in Shakespeare’s play Henry V, the title character makes repeated references to what would become St. Crispin’s Day in a speech to his beleaguered and dispirited troops, implying that the day will be an annual holiday forever marking the battle.

“Henry asserts and acquires agency by repeating the words of others in different form, in so doing twisting them to his own ends, a process that I elsewhere termed ‘adaptive iterability,’” Dubrow said.

“Henry performs the mirror image of that adaptive iterability of past speech by scripting the future utterances of others for them to repeat, rather than himself adapting and repeating previous utterances. He controls the future linguistically through an amalgamation of temporalities and of types of speech that are technically called speech acts.”

These patterns and projections in futurity were so frequent in Shakespeare’s works for many reasons, one being because prophecies, whether political or religious, were central to his period, Dubrow said.

The poet John Donne had recurring themes of futurity in his work for similar reasons, Dubrow said. Donne’s spiritual poems had a central interest in eschatology—the study of last things.

“Donne’s repeated focus on leavetaking, with the act of delivering a valediction under a range of circumstances, testifies to eschatological concerns, and of course to his preoccupation with death per se,” Dubrow said. “I’d add that one reason those concerns are distinctive though not unique in Donne is that he often focuses less on the distant future spiritually than on verges, edges, brinks, what is about to happen.”