skip to main content
Return to Fordham University
You are at:Home»Inside Fordham»Plan Would Revitalize Roadways Around Fordham

Traveling the Bronx roadways near Fordham College at Rose Hill will be easier and more pleasant under a $150 million urban-renewal plan being advanced by the University and three of its neighbors.

Roadways will be refurbished, reconfigured or bedecked with new greenery as part of the plan put forth by the Four Bronx Institutions Alliance (FBIA). Decaying curbs will be replaced, streets will be rezoned, traffic will flow more smoothly and green spaces will be fortified with more tree plantings. 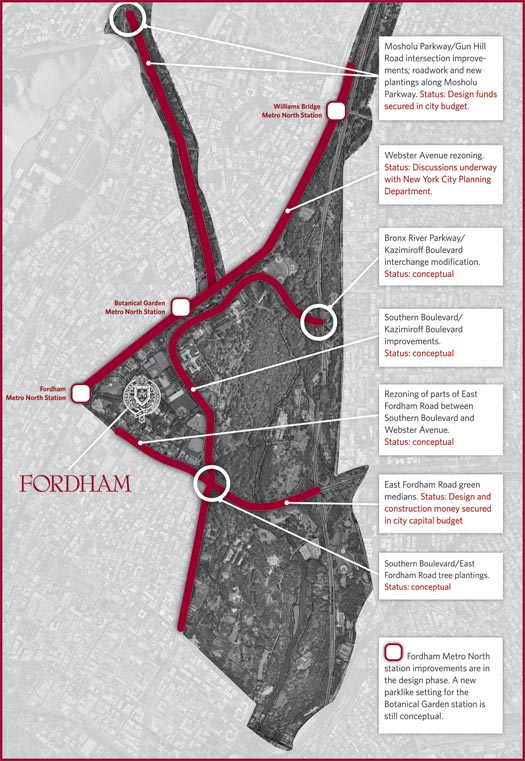 Major components of the Bronx revisioning and renewal being pursued by Fordham and three neighbor institutions.
Graphic by Dawn Jasper

A revitalized atmosphere will unfold along a three-and-a-half-mile corridor of the Bronx.
That’s the vision of the FBIA, which includes the New York Botanical Garden, Montefiore Medical Center, Wildlife Conservation Society/Bronx Zoo and Fordham. The plan reflects a realization among the institutions that they can jointly enact positive changes in the part of the city where they sit side by side.

“What is most heartening to me is the fact that we’re making our relationships with these other institutions into something that’s good for our neighbors,” said Brennan O’Donnell, Ph.D., dean of Fordham College at Rose Hill.

“It’s great that the four institutions are looking outside their gates to find ways to help make their presence something that is beneficial to the whole neighborhood,” he said.

The institutions have secured $11 million in city funding for upgrading East Fordham Road and Mosholu Parkway, said Joseph Muriana, associate vice president for government and urban affairs at Fordham. The FBIA plans to seek the rest over the next several years, and would like to enact all the improvements by 2015.

“This is a concerted effort to improve the part of the city in which we live and work,” said Gregory Long, president of the New York Botanical Garden. “We’re extremely important anchors in this community, and we’ve all worked on the community in various ways in the past.”

Traveling north from the Rose Hill campus along Mosholu Parkway will be easier. The parkway’s intersections with Gun Hill Road and Sedgwick Avenue would be reconfigured to eliminate bottlenecks that create northbound traffic backups.

The parkway, meanwhile, would get new plantings to replenish its trees, along with rebuilt curbs and drainage improvements to alleviate flooding.

The FBIA also seeks to remove the Jersey barriers along East Fordham Road east of the campus, from Southern Boulevard to the Bronx River Parkway. The barriers would be replaced by an elevated median with space for greenery.

Those two projects have funding set aside in the city’s capital budget—design funds for both, and construction money for the East Fordham Road improvements.

Construction on East Fordham Road is expected to start in 2010 or 2011, Muriana said.

Other changes are still conceptual. They include:

Southern Boulevard/Kazimiroff Boulevard
Southern and Kazimiroff boulevards, which connect at East Fordham Road, form a vertical backbone of sorts for the district. The FBIA seeks to plant trees, restore curbs and improve traffic flow. Traffic backups on Kazimiroff Boulevard west of the Bronx River Parkway would be addressed through a reconfiguration of the interchange.

Grand Intersection
Trees would be added to the intersection of Southern Boulevard, Kazimiroff Boulevard and East Fordham Road, which is envisioned as a grand intersection at the hub of the four institutions.

The rezoning will be a multiyear process, to be followed by a push to rezone parts of East Fordham Road along the southern flank of the Rose Hill campus, according to officials at Cooper, Robertson & Partners, the New York City firm retained to do a preliminary design of the FBIA’s vision for the district.

The FBIA also has spoken to the Metropolitan Transportation Authority about improvements in the area. Metro-North plans several upgrades, spokeswoman Marjorie Anders said.

At the Fordham station, Metro-North will refurbish the windows, doors, transoms and walls, among other improvements. The boarded-up front door to the station will be restored. Construction will start in April. Longer-term improvements include a wider outbound platform and better lighting and public address systems.
Depending on funding and land availability, Metro-North also may construct a glass-enclosed walkway atop the retaining wall being built next to Fordham along the northbound railroad tracks, Anders said.

The four institutions formed their partnership in 2005, when they retained an architecture firm to draw up a formal design for renewing their part of the city. After meeting with a deputy to Mayor Michael Bloomberg, they started meeting regularly in 2006 to move the project forward.

The FBIA received one of 11 Neighborhood Achievement Awards given out by Mayor Michael Bloomberg on July 14 in a ceremony at Gracie Mansion.

“It’s exciting that private organizations can jump start community improvement that will later be funded primarily by the public sector,” Long said. “I don’t think there’s a better model for it in New York City.”

The FBIA’s funding was unaffected by the city budget cuts announced by Mayor Bloomberg on Nov. 10. The cuts don’t affect capital funds, Bloomberg spokesman Marc Lavorgna said.
The FBIA is “in it for the long haul,” Muriana said.

“Although we’re entering a difficult budgeting environment, in both the governmental and private sectors, we’re confident that, over the course of the next five years, we will see our plans brought to fruition,” he said.