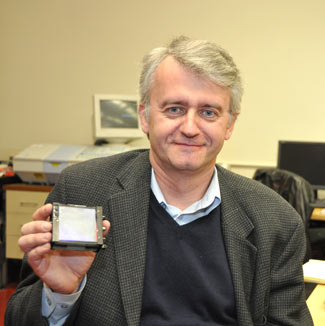 Petr Shibayev (Shibaev), Ph.D., associate professor of physics, holds a small strip of rubbery material between his fingers and rotates it in the light. The surface of the band shimmers an iridescent orange, with shades of green around its edges.

Shibayev stretches the band and the colors instantly morph into violet and blue, representing the opposite end of the spectrum of light.

In his laboratory in Freeman Hall, Shibayev has developed a stretchable cholesteric polymer film with color-changing properties that enable it to manipulate light wavelengths when used in conjunction with a light-emitting laser.

The stretchable substance is one of several types of photonic band gap (PBG) materials with applications in several fields, including technology, engineering, medicine.

“PBG substances are very interesting,” said Shibayev, a native of Russia, “because essentially, we can manipulate light with them.”

In the last two decades, the technology of photonics (the application and harnessing of light) has exploded. The photon is replacing the electron as the particle that most efficiently moves information, making it the new-age semiconductor. Today’s fiber optic-based communication systems transmit information faster than even the most sophisticated electron-based wires, and can carry millions of messages simultaneously through light pulses.

PBG materials function as photon filters because they can selectively allow certain wavelengths of light to pass through while blocking other wavelengths. This property, said Shibayev, helps create a more efficient energy source because photons can be trapped inside the PBG polymer and “optically pumped.”

“Photons that are born inside PBG have what we call a longer dwell time,” said Shibayev. “That’s a good thing, because you can use them to create a highly effective, compact laser based just on a piece of PBG material.”

Today’s commercially applied PBG materials typically consist of inorganic crystals and plastics. How, then, does a stretchable piece of PBG material fit into the equation?

The need for PBG materials, said Shibayev, is increasing as the fields of technology and medicine advance and require improved sensors for scientific and general use. One highly used application of PBG materials is the tunable laser.

A tunable laser is an instrument that tunes over a specific wavelength range, for example, in spectroscopy to explore a cancerous tumor beneath the skin. To get a comprehensive image, the tunable laser must administer several wavelengths of light. Today’s tunable lasers, said Shibayev, can be “cumbersome” machines requiring different color dyes in different solutions to achieve each new wavelength.

“With an elastic polymer PBG, the detection of tumors can become much easier because you can mechanically stretch it and get lasing at different wavelengths,” Shibayev said. “The idea is to have one source of light that you can easily tune.”

The stretchable material could be applied further in the fields of engineering and medicine to help measure very minute alterations in shape, or deformations.

“It is very sensitive material,” Shibayev said. “You can see a huge color change with a deformation of just one-tenth of a millimeter, so the material could be applied to measure even microns.”

Shibayev has been studying soft matter physics—polymers, liquid crystals and other materials that have an internal organization of molecules—for nearly two decades.

In the late 1980s and early 1990s, he was a research scientist working on semiconductors and solid-state physics at the Soviet Union’s Academy of Science, and Moscow State University’s Department of Physics. But such study, Shibayev said, required a very expensive material: liquid helium.

“After the Soviet Union collapsed in 1991, liquid helium basically disappeared,” Shibayev said. “So you might say that ‘circumstances’ brought me to soft material physics.”

After teaching at universities in Italy, Denmark and Texas, Shibayev became a senior scientist for Chiral Photonics, Inc., a New Jersey-based company developing optical devices based on a patented molecular structure.

In his first year, Shibayev recalls being approached to mentor a student in the Department of Chemistry who wanted to work with soft materials. He mentored the student, who wanted to be a scientist but whose grades prevented her from getting into graduate school.

That experience, he said, has inspired a passion to mentor all levels of students. Most recently, he sponsored three undergraduate student projects on polymers in the STEM research fair on April 7.

“Sometimes students may not have solid grades but are extremely good in the lab,” Shibayev said. “They ask questions; they are patient; they like it. The lab experience not only helps them stay interested, but also develops their technical skills and, I hope, makes them more interested in all aspects of science.”

In fact, the first student Shibayev mentored at Fordham eventually got into graduate school and is now pursuing a doctorate in chemistry. She is committed to becoming “a real scientist,” Shibayev said.

“Working with students is refreshing,” he said. “You always learn something. The older one becomes, the more time they should spend with young people.”