skip to main content
Return to Fordham University
You are at:Home»Inside Fordham»Physicist Shares Research and Dreams at A&S Reunion 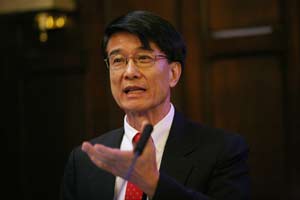 Saying that Fordham University changed his life, Paul Chu, Ph.D., (GSAS ’65) delivered the 2008 Gannon Lecture, “An Odyssey of Discovery,” in which he explained his superconductivity research and outlined his dreams for the advancement of science, technology and education in the 21st century.

“Mark Twain said that man’s noblest delight in life is discovery, to know that you are walking where none have walked,” said Chu, president of Hong Kong University of Science and Technology (HKUST) and the T.L.L. Temple Chair of Science at the University of Houston. “What better joy can there be for a scientist to discover a new theory, a new phenomenon or new material? It is discovery that changes the world.”

Chu spoke before an audience of 200 attendees on March 28 at Communitas ’08, the alumni reunion weekend of the Graduate School of Arts and Sciences (GSAS).

He said that Fordham was his first exposure to America during a time when many young people in China wanted to prove that their nation was capable of great achievements, on par with western nations.

“I wanted to be a scientist, but I was timid,” Chu recalled. “At Fordham, I could work at my own pace, and that developed my confidence.”

The award-winning physicist received the National Medal of Science, the top honor given to a U.S. scientist, for his work in achieving stable superconductivity at a temperature above 90 degrees Kelvin. Superconductors enable electricity to move with little or no resistance through certain materials at extremely low temperatures, requiring very little power to maintain flow.

Chu also serves as executive director of the Texas Center for Superconductivity. He credited his Fordham professors, particularly Joseph Mulligan, Ph.D., and Joseph Budnick, Ph.D., with leading him into solid-state physics when he was leaning toward a different branch.

After presenting a slide show on his research, Chu shared his dream for a future where high-temperature superconductors (HTS) power the world’s energy and transportation sources cleanly and efficiently. HTS, he said, can play a critical role in making the world’s environment cleaner now that emerging economic giant China is entering its “rich and dirty” phase of industrialization.

“We have to change our living habits now,” he said. “Can you imagine if every person in China had a car? The world would be ruined.”

Chu said he also hopes to move HKUST toward even greater prominence as a research institute, and to help develop a “room temperature” superconductor that would be more efficient than present materials, as it would require less energy for cooling.

“I tell students that if you can find that, you can book your ticket to Stockholm,” he said, referring to the Swedish city where the Nobel Prize is given.

Earlier that day, Chu joined a panel discussion on “Emerging Science and Science Emergence in the 21st Century,” that included Praveen Chaudhari, Sc.D., former director of Brookhaven Laboratory; Ellis Rubenstein, Ph.D., president of the New York Academy of Sciences; and Camille Minichino, Ph.D., (GSAS ’65 & ’68) a retired physicist from the Laurence Livermore National Laboratory. The discussion, moderated by Frank Hsu, Ph.D., Clavius Professor of Science at Fordham, focused on how each rose to the tops of their respective fields.