skip to main content
Return to Fordham University
You are at:Home»Inside Fordham»Featured Photo»Photo Essay: Dancing the Night Away for Charity 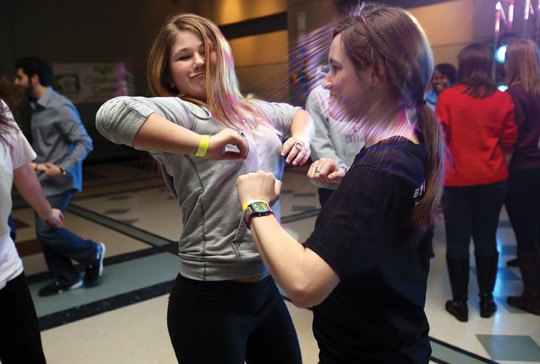 As many as 400 Fordham students shimmied, hopped, and bopped the night away on Feb. 7 at O’Hare Commons, at a Fordham dance marathon benefit.

The dance, which was organized by the Resident Hall Association, was a fundraiser for the B+ Foundation, which supports pediatric cancer research.

RHA president and Gabelli School of Business senior Sarah Hill said the group was inspired to throw the dance, which went from 3 p.m. to 1 a.m., after working with B+ on a smaller fundraiser last year, when they met the foundation’s founder, Chris McDonough.

“RHA became really attached to the organization just because he delivered such a wonderful speech,” she said. “The money they raise goes straight to the families and the children, and they don’t use it for their own funding.”

Although their initial fundraising goal was $15,000, the group surpassed $20,000 before the first feet hit the dance floor. Ultimately, the dance party, which featured bands, disc jockeys, and a Zumba instructor, raised $30,059.

“When you have a role on campus, you want to do something to change things somehow for the better,” Hill said.

She added that she’d like to see the marathon “flourish and become a tradition at Fordham.”