skip to main content
Return to Fordham University
You are at:Home»Colleges and Schools»Fordham College at Lincoln Center»Philosophy Professor Revives Big Questions in Epistemology 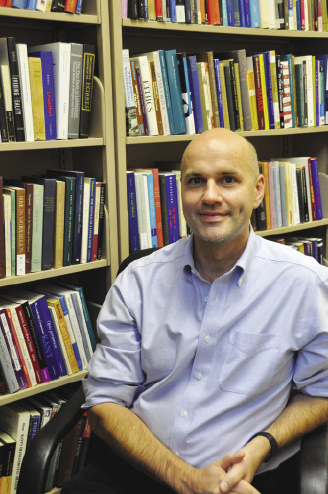 Stephen Grimm, Ph.D., is working on a grant that would shed light on what it means to understand in various contexts.
Photo by Joanna Klimaski

You may think you know what your name is, how many toes you have or who is buried in Grant’s tomb.

But what if, in fact, there exists a godlike Evil Genius who has manipulated everything you think you know? The Evil Genius downloads facts into your mind, paints a landscape you perceive as your home and deceives you into believing that you exist in a world of people. But in reality, you subsist in a dream world that the Evil Genius has created.

So how do you know you really know what you know?

The answer that Stephen Grimm, Ph.D., gives: Why are we asking this question?

Grimm, an assistant professor of philosophy, has spent his career as an epistemologist—a philosopher who studies knowledge—pushing the boundaries of the discipline. For centuries, Grimm said, epistemologists have focused on basic questions about knowledge, hoping to craft a theory that can withstand skeptics such as 17th-century philosopher René Descartes, the author of the Evil Genius problem.

But in doing so, these epistemologists have overlooked important questions.

“A lot of epistemology since Descartes has been focused on defending our beliefs, to show that we have knowledge of ordinary things—knowing that you have a hand or that there’s a chair in the room,” he said. “What we miss are broader concerns about, say, what it takes to understand the world or to achieve wisdom.”

So while other epistemologists asked questions such as “What does it take for a belief to be justified?” and “How much evidence is required until I know something?” Grimm proceeded to the next step. In his doctoral dissertation, “Understanding as an Epistemic Goal,” he began to explore what he maintains is the more important concept—understanding, which focuses not on the what or whether, but rather, the why and how.

“Understanding as a mental act is different than assenting or believing. It’s grasping how things are connected,” he said. “Often you’re driven by a question about why things are the way they are. It starts with puzzlement or curiosity.”

Understanding, he continued, is a higher-level cognitive process that falls within the broader category of knowledge. While the person who has knowledge of a thing might simply hold a collection of discrete facts about it, someone who understands will be able to see how these facts relate to one another and to the larger picture they compose. A kind of “zoomed-out” view of the world, understanding allows its possessor to see the web and not merely the threads.

In his quest to understand understanding, Grimm has explored other branches of philosophy. He has done extensive work in the philosophy of science, a field that has long dealt with higher cognitive concepts.

“Philosophers of science have always been interested in what it takes for a scientific explanation to be a good explanation,” he said. “And part of what makes an explanation good, presumably, is the understanding it generates in the scientist.”

Moreover, as epistemology turns away from its exclusive focus on knowledge and moves toward the bigger questions, epistemologists might be able to draw from the philosophy of science to refine the concept of understanding.

According to Grimm, the benefits of such work would reach beyond philosophy. Becoming clearer on how humans understand can later help unify our understanding into a comprehensive picture of the world—an insight that would particularly serve universities, which house many types of knowledge and, hence, understanding.

Grimm is working to put his research and writing into action through a grant proposal he intends to call “Varieties of Understanding.” If successful, the grant would gather representatives from a wide range of disciplines to ask what it means to understand in a variety of contexts. The proposal, which is in its early stages, would foster the broader understanding that Grimm said universities should aspire to achieve.

In the meantime, though, his efforts continue to evolve within the field that for millennia has been concerned with these higher concepts.

“Contemporary epistemology has often lost sight of what we really desire as intellectual beings, which is, in my view, to understand the world, or to make sense of it,” Grimm said “We want to see how the world hangs together, how it works.”