Something Wicked to Keating Comes: 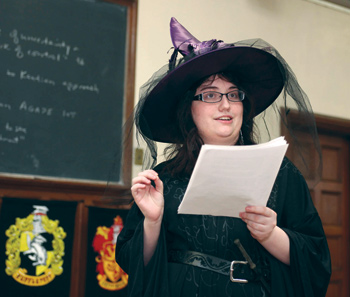 Pencils are swapped for quills, and the Fordham maroon becomes a hue in another school’s color spectrum. By 10 a.m., the wood-paneled room comes to resemble a scene from Hogwarts castle.

“The books provide what you might call the ‘pool of common experience’ that the whole class draws on individually and collectively as we study a variety of philosophical treatments of ideas central to the novels,” Jones said.

Wearing a T-shirt with the symbol of the Deathly Hallows (a key motif in the seventh and final installment in the Potter series), Jones does not merely refer to the books in her teaching. She transforms the classroom into a Potteresque world. 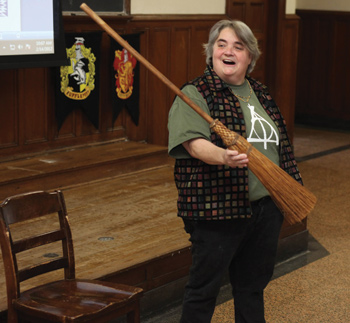 Students wield pens adorned with colored feathers to mimic the quills used at Hogwarts (the magic school); four banners, each bearing the crest of a Hogwarts dormitory, hang from the chalk ledge; and the main lectern displays the Hogwarts coat of arms, emblazoned with the school motto, Draco Dormiens Nunquam Titillandus(or, Never Tickle a Sleeping Dragon).

“The novels are used constantly as a reservoir of examples and test cases for what the philosophies address, and sometimes students are specifically tasked to come to class having plumbed the books for examples or illustrations of certain ideas,” Jones said.

Elements of the novels are also incorporated into the course’s larger goals. On the first day, the class was “sorted” into the four Hogwarts dormitories. By being separated this way, the students encounter the topics of otherness and belonging.

On a more practical level, the four “Houses” also serve as teams. Students who speak in class earn points for their Houses. After class, they can assemble in their House common rooms (i.e., electronic discussion boards) to talk about the material. Additionally, each House will do a final group project that combines a practical element with the philosophy they’re learning.

“Some students have a strong sense of House-belonging and are actively trying to win the House Cup [an end-of-semester prize for the House with the most points], and this can’t help but boost their participation evaluation,” Jones remarked.

To say that the class is near and dear to Jones’ heart would be understatement, given her self-described “obsession” with the novels.

“After reading the books a couple times, I got them all on CD, and have not listened to anything else in my car besides Harry Potter books in several years,” Jones admitted. “They are the soundtrack of my moving through space, so to speak.”

However, the novels move her for deeper reasons yet. Recently, she lost both of her parents to extended illnesses.

“In both cases I was very absorbed in their care and then dying processes,” she said. “Facing their mortality made the subjects of death and souls and identities quite real in an immediate way for me. These being crucial topics in the novels, the mutual reinforcing of life and literary obsession was pretty powerful and meaningful.”

In fact, the themes of death, souls, and self are also prominent in philosophy. As she continued to discover parallels between her line of work and the Potter series, Jones came to believe that the books deserve more critical attention than they have received in popular culture.

The topic of power has also proven relevant. Using the example of the evil
Lord Voldemort’s despotic use of power, the class has analyzed works by philosophers Machiavelli, Nietzsche, and Hannah Arendt.

As Jones has found, the course is pedagogically informative. Because the students enter the class with an already significantunderstanding of the books, the course demonstrates the value of teaching from an established base of knowledge.

“Both professor and student are ‘expertise equals’ where some aspects of the novel are concerned,” she said. “This is very exciting pedagogically—to teach an undergraduate course where students and teacher are in the same place as to dedication, level of experience, detailed knowledge of so decisive an element of the course is wonderful… The presence of material they already love intensely gives the class a unique feel.”

Indeed, the Keating lecture hall was rarely quiet during the class’ 10 a.m. gathering. Quill after quill, students raised their hands and added their commentary, often only mentioning Harry Potter before making some greater philosophical point.

“I hope that students gain from this a sense of how amazing education can be when that level of expertise is assumed before other course material is even encountered,”
Jones said.