skip to main content
Return to Fordham University
You are at:Home»Inside Fordham»Philosopher-Priest Revisits an Age-Old Question 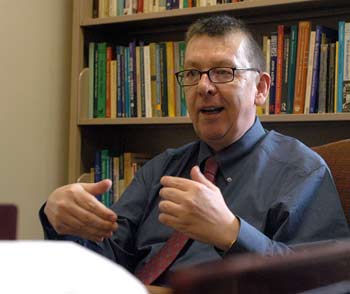 Brian Davies, O.P., Ph.D., professor of philosophy in the Graduate School of Arts and Sciences
Photo by Ken Levinson

Brian Davies, O.P., Ph.D., is in the unusual position of being both a scholar who ponders the nature of God and a Catholic priest who belongs to the order of preachers, the Dominicans. You might say that the professor whose specialties are medieval philosophy and analytical philosophy of religion is ripe to give an “immersion” course in God—if such a thing existed.

In his eighth and latest book,The Reality of God and the Problem of Evil (Continuum Press, 2006), Father Davies tackled one of the questions central to the philosophy of religion: Does the presence of evil suggest the absence of God?

“Many contemporary philosophers would say that evil disproves God’s existence,” Father Davies said. “The idea is that to say that God exists, and to accept that evil exists, is a bit like saying that some circles are square—it’s impossible; there is a logical contradiction.”

“I argue that a discussion on the topic of God and evil is fruitless without going back to basic questions like, ‘Why believe in God in the first place?’” he said. “If there are good philosophical reasons for believing in God, then evil doesn’t disprove God’s existence,” he said.

He further took issue with those who believe that God has a hand in promoting certain evils in the world, or that God is morally culpable for the world’s ills.

“I want to reject the theistic and nontheistic discussions of God and evil that start from the presupposition that God is the sort of thing I am, a moral agent subject to duties and obligations,” he said. “If someone said, ‘Oh well, the tsunamis prove that God isn’t doing what he ought to do,’ I am going to describe that comment as very misguided since it does not make sense to suggest that God is subject to moral obligations.”

Father Davies’ own beliefs are rooted in the teachings of classical Christian philosophers, such as St. Augustine, St. Anselm and St. Thomas Aquinas. As the eternal creator of the universe, God is “omnipotent, omniscient, perfectly good, perfectly actual,” he said. God is the cause of the existence of everything for as long as it exists, Father Davies explained.

“If we ask, ‘Why is there something rather than nothing? Why is there anything at all?’ fundamentally, that’s the God question,” he said. “Some philosophers reject that question. I have spent quite a lot of time defending that question, and I have tried to explain what could be true and false when it comes to what makes the difference between there being something and nothing.”

Father Davies described evil as the “absence of due good.” Due good is good that we as human beings expect to be there, but is missing, much like light is missing from a black hole. An indiscriminate murderer cannot be pure evil because, Father Davies pointed out, there is some good in the simple act of existence: To be at all is to be good. According to Father Davies, even the Devil is not all bad.

What makes someone or something evil or bad is the standard by which that person or thing is being judged—the context.

“You might say of Mother Theresa versus Anton Chigurth (the emotionless assassin in the 2008 Academy Award-winning movie, No Country For Old Men): good her, bad him. What’s the difference?” he asked.

“In the case of a really vicious human being, what you have is simply a human being like you and me who is not meeting a standard [of behavior]. If I suddenly embark on genocide, I won’t turn into something different. I’d just be a bad example of the kind of thing I am.”

“What you have is a really bad case of injustice, a behavior which offends against what we take to be essential to living well together.”

If, indeed, the existence of the universe and all souls in it is proof of the existence of God, and if evil is the “absence of good,” how does the average churchgoing person conceptualize a divinity that has been depicted over the ages in many forms—a man in a white robe, a hand reaching across a universal chasm, or even a face on a tortilla?

“You can’t envision God,” Father Davies said. The anthropomorphizing of God and the hypostatizing of evil are both philosophical mistakes and theological mistakes, he said. “According to Catholic thinkers from St. Augustine to the present, God is entirely simple. There are no metaphysical components to God. God is not an individual of a kind; he is not a member of a class; in fact, he is not part of any world. He’s the creator of the world in which we distinguish between things of kinds.”

Having edited more than 29 volumes of Outstanding Christian Thinkers for Continuum Press and other books on theology, Father Davies is no stranger to scholarly recognition. (He is, in fact, among a handful of Fordham professors listed in the online people’s resource, Wikipedia, with W. Norris Clarke, S.J. and Daniel Berrigan, S.J.) Additionally, Father Davies is the recipient of a 2007 Distinguished Teaching Award from his peers for his work in the classroom. Currently he teaches an introductory course on St. Thomas Aquinas.