Stephen R. Grimm, Ph.D., associate professor of philosophy, has received a $3.56 million grant from the John Templeton Foundation to develop a better understanding of human understanding itself. 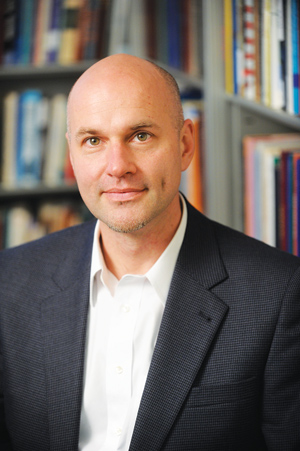 Stephen R. Grimm, Ph.D., will lead a project that brings together experts in multiple disciplines to develop a better understanding of human understanding itself.
Photo by Chris Taggart

Grimm’s award is the largest that Fordham University has ever received in the humanities. It will fund an interdisciplinary initiative, “Varieties of Understanding: New Perspectives from Psychology, Philosophy, and Theology.” Starting July 1, 2013, the three-year endeavor will sponsor research, in these three fields, into the various ways in which human beings understand the world.

“As human beings we have a natural desire to understand the world and our place within it… But what exactly is understanding?” said Grimm, a philosopher who specializes in epistemology.

Understanding, he said, is a high-level cognitive accomplishment that falls within the broader category of knowledge. While someone who has knowledge of a subject might simply believe a collection of facts about it, someone who understands is able to see how these facts relate to one another and to the larger picture.

“In the contemporary world, we’re constantly flooded with information, and any bit of additional information you’re interested in can usually be found by going online or checking your smartphone. But what I think is especially important is how these bits of information connect or hang together, and I think the ability to discern these connections is something we’re in danger of losing.”

Research generated from the Varieties of Understanding project will explore such topics as which cognitive mechanisms are needed for understanding, how understanding of the world changes over time, and how historical, literary, or religious understanding differs from scientific understanding.

The project will use the grant, in part, to distribute approximately $2 million in Requests for Proposals (RFPs) to fund new research on the psychology, philosophy, and theology of understanding.

Tania Lombrozo, Ph.D., assistant professor of psychology at the University of California, Berkeley; Michael Strevens, Ph.D., professor of philosophy at New York University; and Gordon Graham, Ph.D., the Henry Luce III Professor of Philosophy and the Arts at Princeton Theological Seminary, will direct the distribution of RFP awards for psychology, philosophy, and theology, respectively.

In addition, Lombrozo will receive funding to direct empirical and theoretical research out of her Concepts and Cognition Lab at the University of California, Berkeley, on the nature of human understanding.

Bringing these disciplines together, Grimm said, will activate dialogue to provide a better sense of how humans understand the world.

“Despite avenues of important research, psychologists have yet to attempt to integrate their work into something like a unified account of understanding. And while philosophers have recently begun to examine these issues more closely, a number of big questions have barely been explored at all,” Grimm said.

The grant will also fund two conferences over the course of three years. In June of 2015, a mid-point conference will take place at Fordham’s Lincoln Center campus. At this conference, the recipients of RFP awards will present their research in psychology, philosophy, and theology.

In June of 2016, a capstone conference will be held at the Lincoln Center campus, at which all final research results will be presented. In addition, leading scholars and public intellectuals in the fields of psychology, philosophy, and theology will present their own views on the nature of understanding in light of the RFP research presented at the mid-point conference.

“We hope that relationships will be formed among [the scholars]so that interdisciplinary projects will continue,” Grimm said. “We also hope that bringing prominent capstone speakers to comment on the research will attract attention so that new work will flow out of this.”
Over the course of three years, Grimm plans to produce three interconnected articles about understanding and an article about the prospects for a single integrated understanding of the world.

“That will be the hardest question of all, and that’s the reason why a small [effort]wouldn’t make any headway on it,” Grimm said. “I’m optimistic that bringing together psychologists, philosophers, and theologians will make some progress. But I think only a big venture like this has the promise of doing so.”

The John Templeton Foundation is a philanthropic organization dedicated to discoveries related to “the Big Questions of human purpose and reality.” The foundation supports research on subjects ranging from complexity, evolution, and infinity to creativity, forgiveness, love, and free will, and encourages interdisciplinary dialogue.