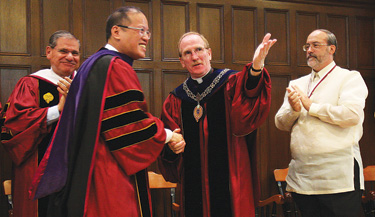 Benigno Aquino III, the 15th president of the Philippines, was feted for his devotion to good governance and anti-corruption measures in an honorary degree ceremony on Sept. 19 at the Rose Hill campus.

In his opening remarks, Joseph M. McShane, S.J., president of Fordham, noted the deep ties between Jesuits and the Philippines.

“Many members of the New York Province of the Society of Jesus dreamed of serving in Mindanao, Zamboanga, Davao, Novaliches, Quezon City and Manila,” Father McShane said to the students, media and dignitaries who packed Keating First.

“The dream of dreams for many of my brethren was to teach at the Ateneo de Manila, and to lead its students to victory over Santo Tomas and LaSalle!” he said.

Father McShane noted that Fordham honored Aquino’s mother 25 years ago in a similar ceremony. Like her, Aquino received a doctor of laws degree, honoris causa. His name has been carved into the steps of the Terrace of Presidents in front of Keating Hall, directly next to his mother’s name.

“Your father inspired a nation. Your mother sparked a revolution of hope in the hearts not only of Filipinos, but of all who love freedom. Following in their footsteps, you have lived your life in the service of others. You have given yourself over to the great and saving work of nurturing democracy,” Father McShane said.

“You have made the rule of law and the care of the poor your special concerns, and in the process, you have shown that a life of principled service can—and does—change the world.”

Aquino says he hopes the Philippine population becomes impervious to corruption as
a result of his efforts.
Photo by Bruce Gilbert

Aquino spoke about the importance of listening to the will of the people, noting that one of his first acts was to cut back on the sirens and police escorts that government officials were using on a regular basis. This was meant to remind them that they are public servants, not masters, he said.

“The maintenance of democracy has not been easy. But it has been a task to which my countrymen have rededicated themselves time and again, regardless of the desire of some leaders to return to the days of impunity and plunder,” he said.

“While far from perfect in its implementation, our basic law has endured because of our people’s proving that the vow they made —‘Never again!’—after the dictator fled, would neither be taken back nor taken away.”

Aquino also noted that it would take more than his own administration’s efforts to restore the Philippines.

“If we are our brother’s keeper, then government is too important a task to leave strictly in the hands of officials,” he said.

“Volunteer organizations, civic associations and NGOs have taken to working with local and national agencies to cut red tape, make policies relevant and achieve inclusive growth—where all citizens have the opportunity to achieve their full potential.”

Ultimate success, Aquino said, would be measured by whether ordinary people become accustomed to having their voices heard by the government.

“While I am the instrument of the people’s will, I too, have my own ambition—that … the Filipino people, by the end of my term, will have grown so accustomed to genuine public service and so intolerant of corruption, that whether a saint or a sinner succeeds me, no one will be able to roll back the tide of progress and good governance,” he said.