skip to main content
Return to Fordham University
You are at:Home»Inside Fordham»Pershing Rifles Celebrate at Fordham 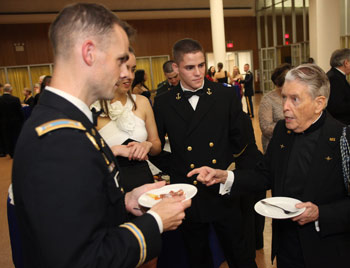 Daniel J. Sullivan, S.J., (right) speaks with members of the National Society of Pershing Rifles, a precision United States military drill team, at the organization’s national ball on Nov. 14 at the McGinley Center.

Father Sullivan (FCRH ’50) was one of the founding members of the Fordham University chapter of the Pershing Rifles, which exists at more than 40 colleges and universities across the country. Membership is composed of Army, Air Force, Navy and Marine Corps officer cadets as well as civilians who are interested in learning aspects of military discipline.

The national ball, which is typically held at the United State Military Academy at West Point, featured Col. Randal A. Dragon, commander of the operations group at the National Training Center.