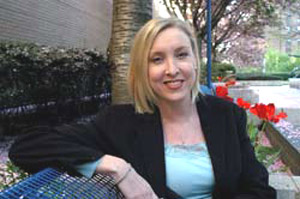 Jeanmarie Krajcik-Lutz is earning her undergraduate degree after enrolling at Fordham in 1986.
Photo by Ken Levinson

Jeanmarie Krajcik-Lutz, a professional singer, dancer and actress with several Broadway credits, has performed on hundreds of stages since beginning her theater career at the age of 10. Her role in Fordham’s graduation procession, however, is a first for her.

The 39-year-old mother of two and veteran of the original Broadway cast of Crazy For You is graduating with a degree in English from Fordham College of Liberal Studies (FCLS) after 22 years as a Fordham student.

“Getting a college degree was always something I knew I wanted to do, so I enrolled right out of high school [in 1986],” Krajcik-Lutz said. “But I had a performing career all of my life and when the role calls, you have to take it. When I started college, my mother used to laugh and say, ‘Murphy’s Law! Every time you register for a class and pay the tuition, you will suddenly get a theater job.’”

Her mother’s prediction was true. On at least four occasions, Krajcik-Lutz’s theater success interrupted her path toward earning a degree. In the do-or-die world of professional theater, she was called out repeatedly on jobs that “seemed to always come up right in the middle of the semester,” she recalled.

In 1991, Krajcik-Lutz landed a part in the Gershwin musical Crazy For You. The chance to be a part of an original Broadway cast was too good to pass up, so she put the degree on hold for five years to perform, also going on tour with the show.

Following her run in the play, she took more time away from school to raise her two children.

In 2005, with her kids past their formative years, Krajcik-Lutz returned to school to complete her degree. While her life and work experiences previously had been a drag on her college ambitions, they now turned into valuable assets. Krajcik-Lutz was able to earn credits doing a “Life Experience Tutorial” and a thesis on her personal history in the theater. Working closely with Cira Vernazza, associate dean of FCLS, she created projects on musical history, vocal technique and dance history.

“Fordham was so accommodating to me,” she recalled. “I never would have finished any other way.”

Today, Krajcik-Lutz performs in commercials and other venues, including the Christmas Show at Radio City Music Hall. She vows that “Fordham has not seen the end of me,” and is serving on the Lincoln Center Dean’s Advisory Board.

The skills that Krajcik-Lutz developed as an English major are also being put to use in her job at the Paper Mill Playhouse, a regional theatre in Milburn, N.J. She writes and edits materials for the playhouse’s Rising Star Awards program, a statewide competition for high school musical theater productions.

“The theater is in my blood,” she said. “If I’m not performing I still have to be part of it.”

And in her latest—and lasting—role, she will walk at graduation while her husband, 12-year-old daughter and 14-year-old son watch proudly.

“They want to see me in my cap and gown,” she said.