skip to main content
Return to Fordham University
You are at:Home»Inside Fordham»“Path To Love” Conference Puts Fordham in Global Spotlight 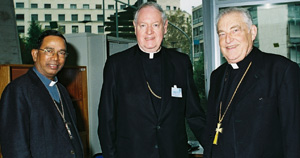 The theme of the conference, part of an ongoing series involving Fordham’s Graduate School of Education’s Center for Catholic School Leadership, was education as a tool for healing and broader understanding. “There was a sense of optimism about the role that the Catholic school system can play to advance a more peaceful, compassionate world,” said James Hennessy, Ph.D., dean of the Graduate School of Education. “It was a stunning success.”

Three representatives of the University addressed the conference, which attracted more than 400 diplomats, clergy and students, representing every continent. In his written remarks to the symposium, Joseph M. McShane, S.J., president of Fordham, said that it was fitting that the conference took place in the city where St. Ignatius Loyola founded the Society of Jesus in 1540. Father McShane also commented on the United Nations General Assembly’s designation of the period from 2005 to 2014 as “The Decade of Education for Sustainable Development.” 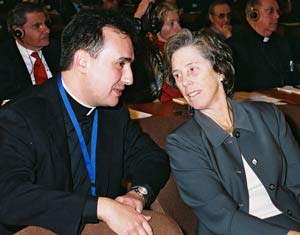 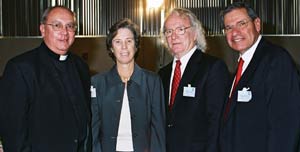 “It is my hope that [this]conference will provide nations and states with strategies for training leaders whose lives are marked by competence, conscience, compassion and commitment to the human family,” said Father McShane. “Fordham sees its participation as a graced invitation to more effective service to the Church and the world.”

Former United Nations Secretary-General Boutros Boutros-Ghali spoke, as did three members of the College of Cardinals: Zenon Cardinal Grocholewski, prefect of the Congregation for Catholic Education; Telesphore Cardinal Toppo, archbishop of Ranchi and president of the Catholic Bishops’ Conference of India; and Edward Cardinal Egan, archbishop of New York. Cardinal Egan began with a story about meeting the famed jazz musician Lionel Hampton (whose piano lessons were paid for by Mother Katherine Drexel, founder of the Sisters of the Blessed Sacrament), and said that to Catholics, education “has but one aim—to develop human persons in their totality, in every facet of their beings as images of God.”

Cardinal Toppo, who was born to illiterate parents in rural India, talked about the sacrifices his parents made to provide him with a Catholic education, and what it meant to him. “The essence of education is the transmission of values such as love, peace and harmony,” he said. “The Church’s mission is education of the human person in love, to respond to the contemporary need for justice in this world.” 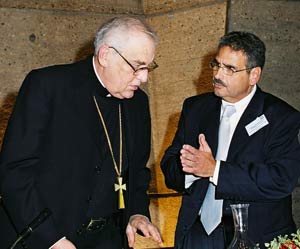 Cardinal Grocholewsky cautioned the audience about an increasing trend toward learning being solely defined as the acquisition of skills and facts, rather than “education, that which allows the person to grow fully in all of his or her dimensions.”

Also addressing the assembly was Finola Cunnane, S.S.L., Ph.D., lecturer and chaplaincy studies coordinator at the Mater Dei Institute of Education at Dublin City University, and an alumna of the Center for Catholic School Leadership. Sister Cunnane called education “a life-long phenomenon [that]takes place in a variety of locations: family, school, parish, workplace.” She commended Cardinal Egan for “drawing attention to the Catholic understanding of education—to draw the soul to God.”

Other notable Fordham alumni, including Catherine Hickey, Ph.D., superintendent of schools for the Catholic Archdiocese of New York, attended the symposium.

Catholic education’s impact on mixed communities of faith was also raised at the symposium: Hennessy noted that one of the conference’s more convincing speakers was the Rev. Marwan Tabet, secretary-general of Catholic education in Lebanon, where 45 percent of children attend Catholic schools, though many are Muslim or Jewish. “We can learn a lot about interfaith relationships from Lebanon,” Hennessy said.

Hennessy thanked John Tognino, chairman of Fordham’s Board of Trustees, for his “generous and staunch” support of the event. Gerald M. Cattaro, Ed.D., executive director of Fordham Graduate School of Education’s Center for Catholic School Leadership, coordinated the academic presentations while Monsignor Follo coordinated the diplomatic community’s presentations. Cattaro credited the Fordham family for cooperating at every level. “I never received a no,” he said.

The Center for Catholic School leadership has participated in similar events in Vienna, Budapest, Glasgow and Italy, and there are plans to host another major event like the UNESCO symposium in the next three to five years. “We have gotten the regard of the Vatican for the work we did,” said Hennessy, “ and we are now ready to meet the goal of the president—to become a center of excellence. It is my hope and expectation that the center will become world recognized.” 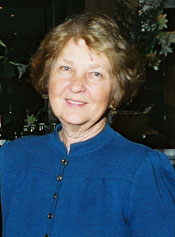 Judith Mills, Ph.D., interim vice president for academic affairs at Fordham, listens to an address at the daylong symposium.

Hennessy said the symposium was part of Fordham’s ongoing involvement in the dialogue on religious education. “This conference is not the end,” he said.

“This event was important,” agreed Cattaro, “but we want to continue the conversation.”

The Permanent Representative of the Holy See to UNESCO, Monsignor Francesco Follo, who addressed the Catholic School Executive Leadership dinner at Rose Hill in May, co-directed the symposium with Cattaro. Part of the impetus for the event, said Cattaro, came from UNESCO’s own staff, a majority of whom are Catholic school graduates.

“When I spoke to Monsignor Follo,” Cattaro said, “we said, ‘what a gift Catholic schools have been to all nations.’”