skip to main content
Return to Fordham University
You are at:Home»Inside Fordham»Parking Spot Turned Into Oasis of Calm at Lincoln Center Campus 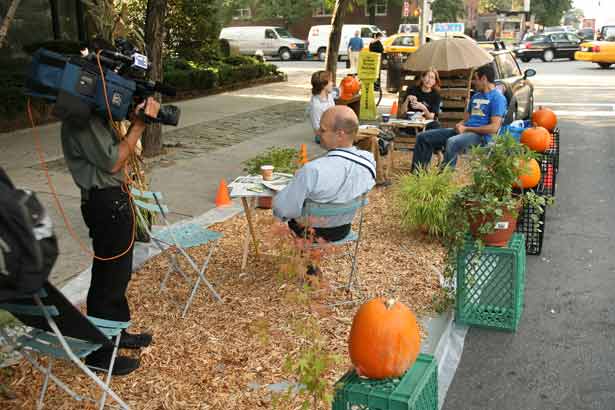 Colin Cathcart, M. Arch., discusses the parking-space park he and his students created with a television crew from NY1.
Photo by Michael Dames

Passersby near the northeast corner of 60th Street and Columbus Avenue across from Fordham University’s Lincoln Center campus got to see something that even the most grizzled denizens of New York’s streets don’t see every day: a “parking” park.

The credit for that goes to architecture professor Colin Cathcart, M. Arch., and Sandra McKee, adjunct professor of architecture. They involved a number of their students in turning a parking spot across the street from Fordham into a pint-sized oasis from the hustle and bustle on Sept. 21, which happened to be National Park(ing) Day.

“We’re feeding the meter,” said Cathcart about the parking spot. “It’s a very expensive parking space. We’re paying a quarter for every seven-and-a-half minutes. So this an expensive park, but I think we did the space proud.”

Cathcart had students in his landscape architecture class work in teams of three to develop concepts for the park. The students took elements of each and created the final design, which featured wood chips on the ground, shrubbery, tables and chairs and even a bird feeder and some pumpkins.

Started by a San Francisco art collective known as REBAR in 2006, PARK(ing) Day has become an international movement involving everyone from artists and activists to ordinary citizens temporarily taking over parking spots in urban centers and transforming them into oases in a sea of asphalt and concrete, if only for a few hours.

According to REBAR, there were 25 “parks” created in New York City on Sept. 21 and scores of others from Rio de Janeiro in Brazil to Vilnius in Lithuania.

At 60th and Columbus, the park drew plenty of interest. “A lot of people from the neighborhood have been coming by and asking questions,” McKee said. “That’s really what the students wanted in designing the park. They really wanted the public to come into the park.”