skip to main content
Return to Fordham University
You are at:Home»Inside Fordham»Parents Go the Extra Mile for Fordham

For parents of children entering college, the nest may be empty. But the members of
the Fordham Parents’ Leadership Council have plenty of opportunities to stay involved
in their children’s lives. 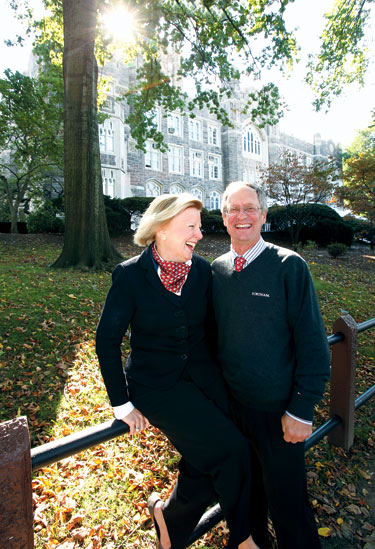 The council, which was launched in 2008 with the help of Patti and John Heller, PAR ’03, ’07, ’11, has served as a resource for parents who want to help promote the well-being and advancement of the University.

“The whole collegiate experience is changing,” said Alex Morr, FCLC ’07, assistant director of the parent fund. “College is no longer just where you go for four years to get a degree and a job. It’s about community, involvement, what you do, and the adult you’re becoming while you’re there.

“We’re encouraging family involvement, and in doing so, we’re winning the hearts and minds of a lot of non-graduates who are sending their kids off to be educated through the Jesuit model, which they’ve come to love and trust.”

The council is arranged around four areas of service: fundraising, communications, career services, and student leadership. It currently counts 74 members, and is chaired by Joan and Michael Conley from Washington, D.C., whose son, Bud, an English and Visual Arts major, is a senior at Fordham College at Rose Hill (FCRH).

“When [Bud] heard Father McShane speak early in 2009 during a visit to Fordham’s campus in the Bronx, he said, ‘This is the school I want. This embodies not only the academic rigors I’m looking for, but the Jesuit philosophy,’” Joan Conley said.

As senior vice president and corporate secretary of the NASDAQ OMX Group, Inc., Joan was instrumental in helping the Graduate School of Business Administration (GBA) secure a grant from the NASDAQ OMX Educational Foundation.

Her personal advice to parents is to lead by example in their enthusiasm about everything Fordham and New York have to offer.

“[I tell them to] walk the campus and streets of the Bronx and Manhattan with [your child]and together experience how fabulous New York City truly is,” she said. “Go into their world, and see the richness and the offerings of Fordham, and the city that is indeed an extension of its campus. Don’t be afraid of it; embrace it. Your enthusiasm for Fordham and New York will be infectious and add to the richness of your child’s education.”

Bob and Ellen Kelly, whose son Nick graduated last year from Fordham College at Rose Hill, and whose son Ben is a Gabelli School of Business senior, have been on the council since its inception. Although they graduated from Notre Dame and Cornell Universities, respectively, Ellen Kelly said they’ve formed attachments to Fordham separate from their children’s. Their interest in WFUV-FM, for example, led to their attending the station’s annual gala in the spring of this year, where Kelly found herself dancing on stage with the evening’s honoree, Chris Isaak.

“Our kids have their own experience, and we have ours, and they kind of overlap. We feel lucky that we peripherally had our Fordham experience with them without being overbearing parents,” she said. “So it’s been a win, win for us.”

In addition to helping find internships for Fordham graduates at Bob Kelly’s law firm, the couple also hosts freshman sendoffs at their home in Shore Haven, N.J., every summer.

“The incoming freshmen love to ask questions—from the practical, to the social, to the logistics of living in the Bronx. And the parents really enjoy meeting other parents too,” Ellen said.

Justine Franklin, director of major gifts at Fordham, said the council also serves as a sounding board for the ways in which the University can improve.

“It’s not just, ‘We love you, don’t change a thing.’ There are parents who are very vocal,” she said. “We need to hear from them, because they may have looked at other schools, or they may have other children who are looking at Fordham, and they’ll say ‘These are the things you have to work on.’”

Roshanak Sheikh, who joined the council this past year, is one parent who brings a valuable perspective to the mix. Her son Kamron Sharif-Zadeh, a pre-med major, transferred last year to Rose Hill from a college in Pennsylvania.

“Kamron has found his niche. He is part of the environment, he eats at Arthur Avenue, he has an apartment with some of his friends, he goes to operas, he DJs. He did lacrosse. I just can’t tell you how much the school has lifted his spirit,” she said.

Describing herself as not particularly religious, Sheikh was skeptical at first of Fordham’s Jesuit roots. She now says she’s eager to help the University in any way she can.

“I am so glad that we made this decision, because the school has good morals, and that’s what I want for my children,” she said. “I want them to be in an environment where they’re encouraged to be a person who thinks of others. That’s the kind of school Fordham is.”