skip to main content
Return to Fordham University
You are at:Home»Inside Fordham»Paradoxical Ideas of Martin Luther Explored During Lecture 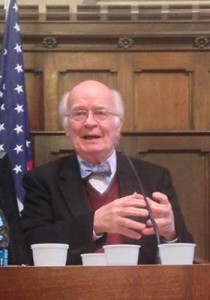 Why do the challenging, paradoxical ideas of Martin Luther remain so seminal around the world?

On April 8, one of the leading lights of the American academy came to Fordham to explore that question. Martin E. Marty, PhD, of the University of Chicago Divinity School, titled his lecture “Wrestling with Luther, Wrestling,” because that’s what the ideas of Martin Luther demand, he said.

“I want to … encourage you to see why people grapple with this strange figure,” said Marty. “He assaults you in such a way that you find yourself having to wrestle.”

Marty delivered the St. Robert Southwell, S.J., Lecture, devoted to the history and theology of the Christian church in the early modern period.

In the nearly 500 years since Luther sparked the Protestant Reformation with his Ninety-Five Theses in 1517, “the world has changed very drastically,” Marty said, noting the rapid growth of Lutheranism in the developing world and the widespread currency of Luther’s ideas. “There are a lot of places where there aren’t Lutherans but there is Luther,” he said.

The man’s ideas have intersected with others’ ideas in unexpected ways. “Atheists like Luther,” Marty said. “Luther would say shocking things like … ‘Faith is the creator of divinity in you,’” leading some to question whether that divinity exists on its own. “If your faith is creating God in you, then is there God?”

“At the same time, the [Lutheran] tradition welcomes the battle with the atheist, and that’s very much in Luther’s spirit too,” he said. In Luther’s words, he said, “‘God prefers the angry shout of the atheist to the pious prattle’ of the Christians who think they have it all figured out.”

Luther’s paradoxes continue to absorb the faithful. His most famous paradox—that Christians can be sinners while also being justified, or absolved of sin—is reflected in the Joint Declaration on Justification by Faith, a 1999 agreement between the Catholic Church and the Lutheran World Federation.

Some complain that the agreement reflects too much of Luther’s “paradoxical formula,” Marty said. But it was also welcomed by many, including intermarried Lutherans and Catholics.

“It didn’t solve everything, and the people who signed this didn’t claim it [did],” he said. “But it’s a vast difference for the husbands and wives and the generations and the hope that everybody else could be in a space where now we begin to understand each other along the way. That’s what was going on in this case.”

He ended with a call for exploring Lutheranism’s relation to the Eastern Orthodox churches as well as the rise of Pentecostalism.

Marty is the Fairfax M. Cone Distinguished Service Professor Emeritus of the History of Modern Christianity at the University of Chicago Divinity School. He is a speaker, columnist, pastor, and a leading authority on religion who has written more than 50 books. He taught religious history for 35 years at the university.

He was also the thesis director for his former student, Joseph M. McShane, S.J., president of Fordham, who introduced Marty as “one of the most remarkable scholars in America.”