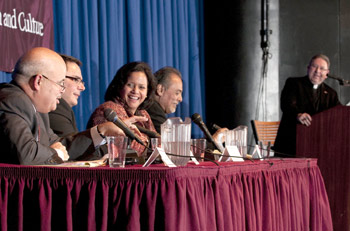 Sweeping changes in United States demographics are transforming the fundamental makeup of the Catholic Church, as the number of Catholic Hispanics continues to climb.

But is American Catholicism prepared for this new wave of parishioners?

That question was raised by a panel of experts on Dec. 10 at “Becoming Latino: The Transformation of U.S. Catholicism,” at Fordham University.

While Protestant and Jewish faiths are losing ground in the United States, said Lugo, Pentecostal and Muslim faiths are gaining. And while Catholicism has remained “incredibly stable” at approximately 24 percent of the U.S. population, the surface stability masks incredible internal changes.

“I’ve always referred to the Roman Catholic Church as a leading demographic indicator,” he added. “You want to see where the country as a whole is going to be in 40 years? Look at the church today.”

“Basically, Latinos are making up for the white cohort departing the Catholic Church,” said Lugo, who added that—given its high birth rate of 2.9 children per household—the Hispanic population is expected to increase 300 percent in the next 40 years.

With that sea change comes significant socioeconomic challenges, however, as education and income levels of Hispanics remain significantly lower than those of white Catholics.

Monsignor Arturo J. Bañuelas, a priest in the Diocese of El Paso, Texas —one of the most heavily Hispanic dioceses in the nation—said that the Catholic Church needs pastoral practices and training policies that recognize Hispanic history and experience, rather than simply attempting to “assimilate” Hispanics into existing church practice.

“We need church leaders to delve deeper into our daily reality, and not just from an ivory tower of orthodoxy,” he said.

As a Hispanic Catholic raised in a small, loving parish in Puerto Rico, panelist and deportation defense attorney Maria M. Odom described feeling alienated as an immigrant in the American Catholic community. Although Odom actively volunteered at her neighborhood parishes, she said she often felt “like I didn’t belong.”

“For our church to embrace this new Latino identity—the brown side of our church—we must insist on a new understanding of migration,” said Odom. “[We] need a deep understanding of why individuals cross their borders, why they are willing to leave their homeland, their cultures, and their families to take the treacherous road—often arriving with nothing in their pockets. Only through that understanding will we receive acceptance.”

The new wave of Catholic Hispanics, said Claudio Burgaleta, S.J., Ph.D., assistant professor of theology in the Graduate School of Religion and Religious Education, is producing a new body of theology that will help deepen the richness of Catholic standard traditions.

Hispanic Catholics, said Father Burgaleta, are both traditionally orthodox and at the same time charismatic (a worship practice normally associated with Pentecostalism). How can traditional Catholic leaders, he asked, integrate a congregation that may engage in handclapping, waving and speaking in tongues as a means of worship, and who also go to confession more often than traditional Catholics?

“One way to do that is to remember what some theologians say is most characteristic about Catholicism—that the Catholic imagination is an analogical or sacramental imagination, one that is able to hold in tension two dimensions that usually don’t cohere,” said Father Burgaleta. “Catholics believe in the Eucharist—that the bread and wine is really more than just bread and wine.

“That sacramental imagination helps to explain some of the richness and uniqueness of the Latino Catholic population,” he said.

“[Easing] standardization is a real issue we have to look at if we’re going to be relevant to the diversity of Latinos, or the whole gamut of American Catholics,” he said. “It’s a tremendous challenge.”

The event was sponsored by Fordham’s Center on Religion and Culture.