skip to main content
Return to Fordham University
You are at:Home»Inside Fordham»Panelists Assess Intrinsic Value of a Liberal Arts Education 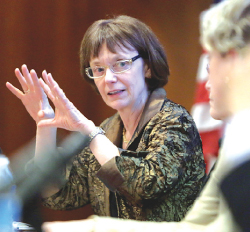 Fordham’s Center for Ethics Education’s April 28 symposium, “The Value of a Liberal Arts Education and America’s Future,” focused on the national scrutiny on liberal arts.

“If the public agrees about anything, its about dollars and cents, cost and outcome,” said Eva Badowska, Ph.D., associate dean for academic programs at the Graduate School of Arts and Sciences and and chair of Fordham’s Task Force on the Future of Liberal Education.

Both Badowska and panelist Rebecca Chopp, president of Swarthmore College, said the liberal arts community must promote the transferable skills of liberal arts. Chopp said that the traditional narrative that a liberal arts education creates a well-rounded individual is not enough to sell it today, and “we need to speak powerfully to the existential needs of the workforce.”

She framed the conversation as it relates to today’s students, the Millennials: While Millennials are confident, engaged, and opinionated—skills that play out well online—their interpersonal skills are often left wanting.

“The students don’t know the basic rules of communication,” she said. “This is one of the great crises in America.”

She said such problems could be mitigated by skills learned on residential liberal arts campuses, where delivery of knowledge could include community and “associative living.”
Jamienne Studley, acting under secretary of the U.S. Department of Education, said learning and living together at a liberal arts college is invaluable for the online generation, noting that “even Google has a campus.”

Trumpeting job outcomes, said Colorado College President Jill Tiefenthaler, Ph.D., often shifts the public focus toward STEM and professional degrees, which then are perceived by the public as more worthy of investment.

“We need to remind the public that a liberal arts education’s sum total far exceeds a job title,” she said.

A by-the-numbers study was presented by Richard Vedder, Ph.D., director of the Center for College Affordability and Accountability. While an accounting graduate may come out of the gate making $45,300 versus $39,700 for a liberal arts graduate, by midcareer philosophy majors’ incomes exceed accounting majors’ by $3,500.

“Liberal arts majors pull ahead a few years after graduation,” he said. “They know how to think better. They are more literate. They can better analyze unique situations and react better. Reading about King Lear, or the American south before the Civil War, subliminally helps them think critically.”

Andrew Delbanco, Ph.D., professor of humanities at Columbia University, said that liberal-arts-bashing is not a recent phenomenon. Quoting Abigail Adams’ “education has never been worse than it is now,” Delbanco said that the liberal arts have always been in trouble.
But the preservation of a liberal arts education in the public and private sectors preserves a society where “young people can decide what they want to become rather than submit to some predetermined position that’s been handed to them.”

“In that sense nothing is more fundamentally American than [a]liberal education.”
The evening represented a culminating event for the work of Fordham’s task force, said Badowska.