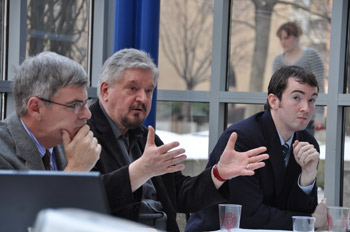 “Do companies and governments, economies and markets, behave like machines or living systems?”

That was the question posed by Nancy Busch, Ph.D., dean of the Graduate School of Arts and Sciences, chief research officer and associate vice president for academic affairs, to open an interdisciplinary discussion titled “Globalization and Its Social Systems as a Living, Self-Organizing Body.”

The event, the second in this year’s “Growing Research at Fordham” series, took place on Feb. 3 at the Lincoln Center campus. Sponsored by the Office of Research, the series aims to foster discussion among faculty and students whose research intersects in thought-provoking and often unexpected ways.

The panel members, each a recipient of a faculty research grant or faculty fellowship, included:

According to Busch, the panelists were chosen because their research provides insight into “a potential paradigm shift in how global social systems are perceived, policies are presented, and crises are averted or addressed.”

This perspective on social systems explores the potential benefits of viewing entities that are typically thought of as mechanical—such as governments, corporations and financial markets—as operating according to organic principles, including adaptation, maturation and evolution.

Rennstich put forth the idea that international institutions, such as states, are better understood by taking a larger view. The contrast, he said, was one of viewing the activities of a single ant as compared to viewing the complexity of an entire ant colony.

According to Rennstich, looking at complex collective behavior reveals how large social systems adapt in response to information that is received from both inside and out—much in the same way that organic systems do.

“That’s learning, and if you do that in a systematic fashion over time, over generations, it’s evolution. So we’re talking about evolutionary systems,” he said.

Zeleny viewed free markets and corporations in a similar light. In considering these social systems as organisms rather than machines, he stressed the necessity for self-sustainability and balance.

In closing, Zeleny traced the evolution of employment in America, which originated in agriculture, but then moved to industry and then, eventually, to services.

“America is the only country where all productive sectors have peaked in terms of their job creation potential,” he said. “The question is: If we are to create jobs, where?”

Moulton and Hume provided concrete examples of the panel’s overarching theme. Moulton applied an organic view to her research on the increased speed of stock market trading. Hume adopted an organic perspective in thinking about the behavior of federal agencies when courts rule against them.

Father McNelis wrapped up the panel by placing the overall theme and its concrete examples in the context of the global economic crisis.

“The goal is to understand better,” he said. “So let’s take the best of both of these—machines and organisms—and better understand our disciplines and add to the value of the knowledge that we have around us.”

The “Growing Research at Fordham” series was launched last spring. The final event of this academic year, “A Delicate Balance,” is scheduled for March 24 at the Lincoln Center campus. It will focus on issues of ecology and environmental preservation.