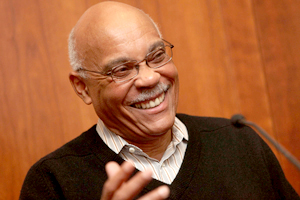 Peter Vaughan is retiring after more than a decade as dean of the Graduate School of Social Service.
Photo by Michael Dames

In his outgoing lecture, Peter Vaughan, Ph.D., the dean of the Graduate School of Social Service (GSS) outlined two significant challenges facing the field of social work: enhancing public relations and creating diversity within the ranks.

“Simply put, we are challenged by bad press,” said Vaughan, who will retire this summer after serving more than a decade as GSS dean.

He said that both the taxpaying public and the recipients of services tend to be critical of the often-unenviable work of social workers. Taxpayers resent having to help those who have “not met the self-sufficiency criterion of what many consider the American ‘ideal.’” And clients resent having to be told how to best handle their social problems.

“In other words, social workers frequently represent an unpopular cause for unpopular people,” he said.

This uphill public relations battle is exacerbated each time a child in the child welfare system is hurt, whenever a parolee commits a crime, or whenever a patient with dementia wanders away from a mental health facility.  Such bad press allows others to define the profession—a task that Vaughan argued should be owned by the social workers themselves.

“We cannot and must not leave the telling of our stories to others,” he said. And while client confidentiality must remain a priority, holding back stories of the good work of social workers means that the importance of the work can be minimized or distorted by others.

On diversity, Vaughan said that it is integral to “ensure that each of us is welcome to eat at the table of good will.” He explained the importance of “starting where the client is,” adding that workers must be physically and psychologically available to those seeking help; thus, the workforce should reflect client diversity.

“If inclusion of a diverse staff and management that reflects the buying public makes business sense to Macy’s, then it should make good business sense in social service organizations,” he said.

For those who claim that hiring a diverse well-trained staff is impossible, Vaughan argued that sufficient support is needed to mine diverse talent. If that talent can’t be found, it should be cultivated through “resources to look for them.”

After more than a decade at the helm at GSS, Vaughan recalled the early days of his own career when he was still “one of those in-your-face-do-gooders.”

“I was convinced, as I stood beside the reflecting pool of the Lincoln Memorial on a hot August day in 1963 and listening to the speeches about hope, that I could make a difference for the common good as a member of the social work profession,” he said. “I still believe deeply in the good work we do and in our potential to do even more.”

Under Vaughan’s decade of leadership, the GSS has increased its focus on human rights and social justice in its curriculum and has risen in college ranks to its current place of 11th in U.S. News & World Report for graduate schools of social work. It is Fordham’s highest-ranking school. 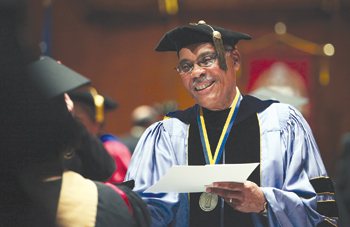 Joseph M. McShane, S.J. president of Fordham, presented Vaughan with the medal at the GSS diploma ceremony on May 20, calling him a “wise, patient, and loving patron saint.”

Admitting that the day was a bittersweet one, GSS faculty and administrators lauded Vaughan for his exceptional service to the school. Under Vaughan’s tenure, GSS jumped to No. 11 in U.S. News & World Report national rankings, the highest in the school’s history. Its online MSW program is ranked No. 1 in the nation.

“These achievements are primarily due to Peter,” said Sandra G. Turner, Ph.D., associate dean of GSS. “He is a visionary. He has always looked at what could be rather than what is.”