skip to main content
Return to Fordham University
You are at:Home»Inside Fordham»One Though Many 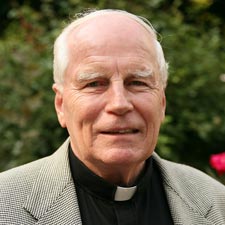 The whole world,” insisted one of my professors years ago, “can be divided up into two kinds of people when they come face to face with diversity. Some will say: ‘How different from us, how strange of them.’ Others will say: ‘How different from us, how interesting! There is so much to learn from them.’” My professor no doubt had exaggerated to make a point, but his pedagogical hyperbole nonetheless offered an important insight into human behavior. Whereas one reaction to diversity leads to intolerance, prejudice and alienation, the other promotes the kind of openness, sharing and respectful curiosity that should characterize university life and, by extension, the best of civil discourse and civic life and, by still further extension, harmony and peace in our world.

Henri Nouwen once contrasted two social mindsets and ways of living as the “taking” form of existence and the “forgiving” form. The taking form, he wrote, is characterized by controlling and dominating others, manipulating, stereotyping and judging—or prejudging—them. The forgiving form, on the other hand, allows for, expects and respects differences. No doubt, forgiving differences can sometimes be more difficult and challenging than forgiving wrongs. Ask any roommate or, better still, ask a married couple. But such an attitude is needed for developing any kind of true personal relationship.

Our lives are filled with invitations to “encounter” others. The word itself denotes the challenge of moving into a world that is counter, or contrary, to our own. We meet each other from our different backgrounds created by cultural and environmental diversity—different experiences and different expectations. Listening to and understanding another person requires that we leave behind our own world for the time being in order to enter into the other’s, as if we were the other. Only then can we show others the acceptance and respect that will allow them freely to be and share themselves openly with us. Accepting others does not mean always agreeing with them or approving of what they do.

I learned this lesson from experience, during more than two decades of living in an altogether different culture that I came to respect and value and, indeed, learn from. Unless we are capable of appreciating differences, we shall rarely be able to transcend a self-imposed close-mindedness and isolation—as individuals, as communities and groups, as nations—so as to enter into the world of others in friendship, trust and, yes, even of love. Remember what Ben Franklin said long ago: “Those who love only themselves need not fear having any rivals.”

We are no strangers to diversity and pluralism. As a nation, we were founded on cultural and religious differences and continue to boast of our successful “melting pot” experience of assimilating those differences. But have we in the process lost some of the traditions that shaped the identities of our forbearers and were handed on to us—identities that should enrich and not endanger our unity?

“The same forces of mobility and education and commerce that have brought diverse people together,” writes sociologist Nancy Ammerman, “have also dislodged people from traditional communities in the process.” In order to be politically correct, many of us are generally reticent about sharing our views and beliefs with others, and prefer to settle for a “least common denominator” that somehow, but only vaguely, unites us all. As a result, for example, we may be ready to subscribe at least to a religious “deism” that accepts God’s existence but not necessarily any active presence in our lives or in our history, except for God wanting us all to be “good, nice, and fair to each other.” Does this entitle us to be called a religious nation? Not really, or so it seems to me, when we suppress the rich faith traditions and identities we have here in our midst. “Within Christianity,” Ammerman continues, “ecumenism emphasized common ground and discouraged particularity. The result for many young adults is a growing indifference to those particularities—we’re all the same, aren’t we?”

Once, during a high school retreat in India, a Hindu girl proudly asserted before her classmates that, though she had given up many of her faith traditions, she still believed in God and prayed every day. I then asked her: “But what will you pass on to your children?” Having witnessed a generation or two of a faith tradition becoming “fuzzier and fuzzier,” I wonder if we might not ask ourselves a similar question today?

True, the principles of religious freedom, to which church and state by and large subscribe to in our land, both protect the rights of individuals and groups to practice their own faith without fear of censure, and protect us all from any behavior by others that would openly or subtly coerce us and inhibit our freedom of conscience through aggressive proselytization. But, especially in a university setting, students should be given the opportunity to learn more about their own faith tradition by examining its teachings and values in an academic yet very personal way. At the same time, there should be opportunities to learn from one another and about other faith traditions as well.

Over the years, I have discovered an “attitudinal continuum” that has helped me understand society’s coping with diversity in ways both healthy and unhealthy. Let me first propose the continuum and then briefly explain each stage of that continuum.

Attitudinal Continuum vis-à-vis Diversity
Apathy, Acceptance, Assertiveness, Aggression
Obviously, the extreme behaviors of apathy and aggression have no place in effective, healthy discourse. Apathy, in effect, communicates to the other: “I really don’t care what your views or beliefs are. It just doesn’t matter to me, and I’m not interested in getting involved.” Aggression, on the other hand, seeks to control the response of the other: “You had better subscribe to my views and beliefs for your own good. It’s the only way that we can get along.”

Acceptance implies that we listen to the other with understanding and even appreciation: “Your views seem very interesting to me. I have never really looked at the world in this way. I value your ideas and, by extension, I suppose that means I value you. Though I may see things differently from you, I respect your views and I think I understand the insights and values that ground them.”

Assertiveness (“This is what I believe and this is why. My beliefs and actions are firmly grounded in what I myself have seen and heard, or in what reliable and credible teachers and witnesses, past and present, have handed on to me.”) is probably where we seem most deficient these days, either because we are not well-grounded in the foundations of our own traditional teachings and beliefs, or because we fear that sharing our views and beliefs with others might seem like imposing them on others and therefore lead to alienation and even to possible hostility. But this is where the university community, with its own tradition of free and reasoned discourse, should serve as a laboratory in healthy relationships and effective communication.

E pluribus unum requires that we not just suppress our differences but that we learn to respect and value them, even as we deepen our understanding and appreciation of our own views and beliefs, and our ability to share them openly and freely with others. We might learn much about who we are by appreciating who we are not.