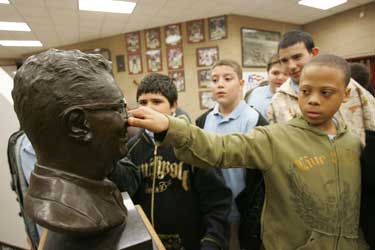 A student from the Urban Institute of Mathematics tweaks the nose on a bust of coaching legend Vince Lombardi at the Lombardi Memorial Center.
Photo by Bruce Gilbert

In the Throgs Neck section of the Bronx, a college education is not a sure thing.

That is precisely why the Graduate School of Education (GSE) collaborated with the Urban Institute of Mathematics (UIM), located in Intermediate School 192 in the Bronx, to host a tour of the Rose Hill campus for 135 sixth graders. To the young students, the tour offered inspiration and food for thought—as well as real food and real fun.

“Part of the GSE’s mission is to work in under-resourced communities,” said Carolyn McGown, coordinator of the GSE’s childhood and early childhood master’s programs. “We want to help make college a part of these students’ mindsets. Many of them have never been to this campus, even though it’s 10 minutes from their houses.”

Students came in groups of 35 over the course of four days, from March 31 through April 3, and were given tours by Fordham students working for the admissions office. After watching a promotional film about Fordham, the groups toured the McGinley Center, sports facilities and various academic buildings.

“This is inspiring,” said Dominick Carbone, 11, seeing the Rose Hill gym for the first time. “If I were to go here, I’d definitely try out for the basketball team.”

“How long is a class?” said John Vasquez, as he watched a communications lecture in Keating Hall.

UIM Principal Jennifer Joynt said the magnet school came about when IS 192 was slated as a “failing school” and set to be phased out. In September 2007, UIM opened in part of IS 192 as an empowerment school, offering a strong mathematics curriculum and reduced class sizes. UIM students are referred to by their teachers as “scholars” and wear a uniform shirt with the logo UIM 2018 to heavily promote the idea of being a part of a college graduation class.

“UIM is all about empowering them with the things that they can do,” Joynt said.

The tour was broken up into “same sex” groups for one period, an approach that Joynt said keeps the staff attentive to “the social-emotional piece that is vital to each adolescent student.” Ryan McCabe, a UIM teacher and basketball coach who accompanied the boys’ tour, gathered them in a traditional sports huddle on Coffey Field to say a chant.