skip to main content
Return to Fordham University
You are at:Home»Inside Fordham»Faculty Reads»On the Reasons (or Lack Thereof) Why We Love

Love is often at the center of conflict. In a new book co-edited by John Davenport, PhD, it’s no different. 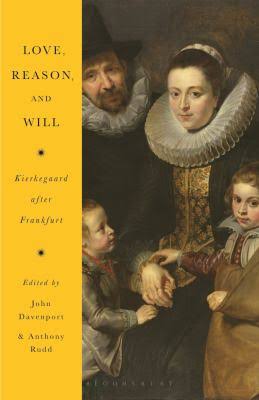 Love, Reason and Will: Kierkegaard after Frankfurt (Bloomsbury Publishing, 2015), released last month, presents a series of arguments on the nature of love, as seen through the lenses of living contemporary philosopher Harry Frankfurt and the19th-century theologian and existentialist Søren Kierkegaard.

Davenport, professor of philosophy and director of Fordham’s Peace and Justice Studies program, likened the contrasting perspectives of love among the two thinkers to the two Greek words for love: Eros, desire-based love, and Agape, unconditional love or neighborly love.

“In a sense the book is about this old conflict,” said Davenport, who co-edited the book with Anthony Rudd, PhD, associate professor of philosophy St. Olaf College. “The Eros theory sees the attraction of love like that of the bee to sugar, a magnetic attraction, and the Agape view sees a love without any prior attraction, such as the benevolent Samaritan helping a stranger.”

Frankfurt, an analytic philosopher, argues that all love has an Agapic form of some kind, said Davenport, and that love is based on “no reason.” If a person sees value in the act of loving a stranger, it is not because of an attraction of any kind; rather, it is volitional: because we are committed to that person, we see value I them.

Kierkegaard’s Christian-influenced writing on Agapic love, however, imagines it as responding to the simple “personhood of another person, or the watermark made in the image of God. So there is in fact a reason for loving a person as a neighbor.”

“Some may find these two philosophers as unlikely conversation partners,” said Davenport; yet Frankfurt’s work, he said, has inspired a renaissance in the examination of love among philosophers such as Stanley Cavell, Iris Murdoch, Alan Soble, and others. At the same time, there has been a new wave of scholarship on Kierkegaard.

Part of Davenport’s interest in doing the book, he said, arose from having studied philosophy with Frankfurt as an undergraduate at Yale, not long after Frankfurt had gained some popular-culture notoriety for a paper he wrote, “On Bullshit,” part of which was featured as an essay in Harper’s magazine. Davenport has contributed an essay to the volume in which he argues that Frankfurt’s critique of bullshit implies that “truth is objectively worth loving. “

The volume is also an homage to Kierkegaard’s insightful thoughts on the topic of love, however, and the hope that comparing his ideas to Frankfurt’s more secular approach, Davenport said, “might shed light on both of these philosophers [and]enable us to think better ourselves about these fundamental issues.”

“We are in the midst of a new era of productive scholarship on forms of human love,” he said.