skip to main content
Return to Fordham University
You are at:Home»Inside Fordham»On Economics and Enterprise: Improving Microfinance in the Developing World 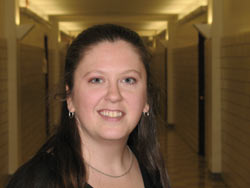 Gwendolyn Tedeschi, Ph.D., assistant professor of economics, says microfinance is a good solution for the economies of the developing world.
Photo by Victor M. Inzunza

When Muhammad Yunus won the Nobel Peace Prize in 2006, Gwendolyn Tedeschi, Ph.D., couldn’t help but be amazed by how far microfinance—the daring idea of lending money to people of modest means in the developing world to start businesses—had come on the international stage.

For Tedeschi, an assistant professor of economics at Fordham University, not only had Yunus, founder of the Grameen Bank in Bangladesh, been awarded one of the most prestigious honors in the world, but microfinance had spread in a matter of few decades to just about every corner of the globe, from Dhaka to New York City and beyond.

“It was so much easier to define microfinance in its early years,” Tedeschi said. “In those days, it was simply the Grameen Bank-style small loans and group banking, and the loans went mostly to women. There is a lot more individual lending today, and the loan sizes have ballooned depending on which side of the world you are. And you’ve got different types of loans. . . . So microfinance has definitely evolved.”

An expert in developmental economics, Tedeschi has sought to understand through her research the role economic development initiatives like microfinance play in helping the poor. In fact, the idea of helping the poor is one of the misconceptions about microfinance. The research is clear, she said, that microcredit programs don’t necessarily target the destitute. Instead, they reach a sector economists refer to as the “vulnerable nonpoor,” people who may already own a business but are only an illness or economic downturn away from falling into abject poverty.

That doesn’t diminish the power of microfinance as a tool for social mobility, she said, because the vulnerable nonpoor are an important sector for any developing country to support. Often borrowers, she said, don’t use the money to expand their businesses—they use it to diversify. Many families in countries like Bangladesh have more than one business, sometimes several. By allowing families to open second or third businesses, Tedeschi said the loans, which can range from $25 to a few thousand, help people maintain their footing in the rocky terrain just beyond the poverty line.

Yet microfinance isn’t a perfect instrument for social mobility.

People do default, she said, and worse, they will try to avoid it at all costs. In Bolivia, for instance, a crisis in its financial markets was made worse because people were borrowing from one bank to pay off another. The reason borrowers will take such extreme measures, Tedeschi said, is because in most cases a microfinance institution will ban a person from ever receiving another loan if they fail to repay.

It’s a draconian measure placing people in the untenable position of having to make difficult decisions in order to preserve their ability to borrow.

In 2006, Tedeschi published an article in the Journal of Development Economics in which she proposed a new model for microlending contracts that uses both the carrot and the stick instead of just a stick—the lifetime ban. Her argument is that it’s simply a matter of finding the right amount of time to cut off people from future loans in the event of default. After all, she said, when people in the United States file for bankruptcy they lose their creditworthiness for seven years. Once that period expires, the bankruptcy judgment is expunged from the person’s record.

There’s no reason, she said, microlenders in the developing world can’t apply a punishment phase comparable to that of the U.S. banking system. In the article, she maps a scheme of financial equations to help lenders determine what that period should be.

“In some cases, a period of two or three months or two or three years might be enough to deter people from not repaying their loans when they are actually able to,” she said. “That’s the key: You want people to repay if they are able—you don’t want them to take the money and run. But you don’t want it so long that it unnecessarily punishes the people who have had economic hard times.”

Moreover, the banks can factor incentives into the loan contracts. For instance, a bank might lend someone a small initial loan and only when the money is paid back will the person become eligible for a bigger one. Essentially, the borrower is building credit, she said, in order to qualify for a big enough loan to start or expand a business and thus has a strong incentive to pay back the money.

In the end, Tedeschi is sanguine about the prospects of microfinance as a potent economic force in the developing world. Some economists have criticized microfinance because most lenders are not profitable—many of them are subsidized by international organizations like the World Bank. But these analyses presuppose, she said, a perfect economic environment with fully matured financial markets. To her, that’s a problem. In much of the developing world, financial markets are far from ideal.

“In many parts of the developing world, there are no credit bureaus, there is no credit information available,” she said. “The fact is that there are problems in credit markets in developed countries, too. But we have the credit bureaus and the vast majority of us have a credit history and collateral, which means we can go to a bank and borrow money.

“So the developed world has come up with institutions to overcome the problems of the credit market—the developing world simply hasn’t, especially among the poor. Until that changes, we’re going to need microfinance. ”