skip to main content
Return to Fordham University
You are at:Home»Faculty Profiles»On Darwin and Religion: Q&A with Sister Elizabeth Johnson 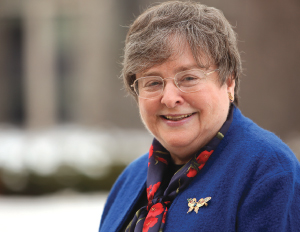 Sister Elizabeth Johnson’s new book, Ask the Beasts: Darwin and the God of Love, sets up a dialogue between science and religion.
Photo by Tom Stoelker

In her new book, Ask the Beasts: Darwin and the God of Love (Bloomsbury, 2014), Distinguished Professor of Theology Elizabeth Johnson, Ph.D., asserts that Darwin’s theories and Catholicism are not mutually exclusive.

Who is the audience for this book?
This book sets up a dialogue between science and religion. It has a dual audience: primarily the academy, and also the educated reading public. My hope is that many folks will find it interesting, at least in some aspects.

Why have we neglected this planet and the other creatures?
For centuries theology worked with the idea that in order to be close to God we have to turn our backs on the Earth. Life on Earth is just something to get through because the real goal is to get to heaven. How did we end up here?
When early Christian thought encountered Hellenistic philosophy around the second or third century, it absorbed a dualistic view of spirit and matter. The two began to split. The Eastern part of the church, the Orthodox, did not follow that split as rigorously as the West. We can find beautiful writings in the Eastern tradition that treat creation as part of what’s good and what is taken up in glory with us at the end of time. But in the Latin West, this view disappears as the church developed a more Roman pattern, which was juridical, legal, and concentrated on human sin. Then theology made a huge shift toward a focus on wrongdoing and forgiveness.

Does your book address any of those legal arguments?
It names them as part of the problem, but does not linger over them. We’ve been-there-done-that for centuries. The need now is to envision something more holistic. So the bulk of the book looks into the Christian tradition, trying to make an ecological case for the 1.2 billion Catholics. We need to bring forward resources in our own tradition.

What are your sources?
I spend the first four chapters parsing Darwin’s view. As a dialogue partner I then bring in the Nicene Creed as shorthand of what Catholics believe about God. It’s a narrative like Darwin’s narrative of life. It tells of God and God’s acts in relation to the Earth. The book puts these two in dialogue and moves toward an ethic at the end. Of course a primary source would be scripture, but Thomas Aquinas plays an important role, as do various other theologians and philosophers. I use the Jesuit theologian Karl Rahner and a great number of feminist theorists such as Rosemary Ruether, Heather Eaton, and Karen Warren.

What’s do the feminists have to say about this?
There’s a whole range of analysis showing how the Western mindset, crafted by men, equated women with nature. In the dualistic framework of spirit over matter, men were allied with spirit while women and nature were connected with matter. Men were considered rational and independent, while women and nature were bodily and dependent on the underside of that dualism. Much of this analysis is called ecofeminism; it parses out or deconstructs prejudice against women, drawing out the links with a dim view of nature.

For example, Carolyn Merchant found that Sir Francis Bacon, the father of the scientific method, compared the right of men to investigate nature to the right of the Inquisition judges to interrogate women under sexual torture. Men may enter the holes of both women and nature and make them give up their secrets; men may pull them by the hair to master and overcome them. The analogies of rape and dominance stand at the dawn of the modern era of scientific investigation.

These are some tough facts for even the most educated to contemplate. Does it in a way explain religious resistance to evolution?
Not directly. Fundamentalisms of all kinds are born in resistance to the modern world: you need to have secure borders; you know what you know on good authority; you are secure in how you live; and you’re not bothered by the ambiguity of life—especially in our modern age when life is getting so confusing. Biblical fundamentalism, which reads the opening chapters of Genesis literally, secures your world based on the central idea that God is a male monarch ruling over everything. The theory of evolution, which explains that all living creatures developed by a natural process, obviously threatens that view of God. Thus it needs to be rejected.

My book works to develop the idea of the God of Love who dwells within, empowers, suffers with, and moves in company with the evolving Earth. Then evolution is not a threat.

What still needs to be done?
Parents and teachers need to educate their children to love the world. Business has a huge responsibility to do business with an eye on the bottom line that’s green as well as black or red. Every person has something to contribute. If every believer in God lived their life in an ecologically responsible way, including how they vote and how they shop, it would make a huge difference for this planet.

There is a consciousness that’s growing, especially among younger scholars—I can’t think of a single profession that isn’t affected. In my field I see more and more attention given to the Earth. Fifty years ago there was little attention given to social justice; now it is a core concern. In a parallel way, ecological awareness presses us to change our behaviors that are depleting the Earth and its creatures.

In my view this challenge is profoundly connected with the love of God.