skip to main content
Return to Fordham University
You are at:Home»Colleges and Schools»Graduate School of Arts and Sciences»Off-the-Books Lessons in Pretoria

“We understand that economists rely on number crunching; we just hope that they learn not to crunch the people between the numbers,” said Anthony Egan, S.J., of South Africa’s Jesuit Institute. 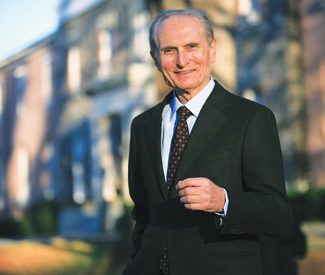 Dominick Salvatore, Ph.D., who was just named honorary professor at the University of Pretoria, will be lecturing throughout South Africa in the coming year.
Photo by Tom Stoelker

Father Egan, a native of Cape Town, was referring to the Emerging Markets program being offered by the Graduate School of Arts and Sciences’ (GSAS) economics department. It is part of two exchange programs being offered by Fordham in partnership with the University of Pretoria.

The relatively quick success of the two Fordham programs bodes well for future endeavors, said Dean Nancy Busch, Ph.D., dean of GSAS and Fordham’s chief research officer. She said the University is already looking to build on new relationships across several departments and disciplines, including history, theology, biology, post-doctorate research in genetics, and agriculture sciences. In a very customized approach, individual Fordham graduate students will be matched up with Pretoria mentors, and vice versa.

The two initial programs got their start in 2008 after Fikile Magubane, South Africa’s then-consul general in New York, reached out to several universities, including Fordham, in an effort to build exchanges.

“We turned out to be the most aggressive institution and immediately sent a delegation,” said Booi Themeli, Ph.D., clinical assistant professor and coordinator of both programs.

South Africa-born Themeli said that the University of Pretoria, once a “breeding ground” for apartheid leadership, now runs an internationally respected business school, the Gordon Institute of Business Science, which is attractive to Fordham for promoting student exchange.

But for all the changes, South Africa remains a country in flux. Divisions that were once racial are now economic, said Dominick Salvatore, Ph.D., Distinguished Professor of Economics, chair of the department and director of its graduate program.

Salvatore headed to Pretoria this month on an honorary professorship, and will be giving a series of lectures at the university and throughout the country. The Mapungubwe Institute for Strategic Reflection, a South African think tank comprising research and policymaking experts, has invited him to be a fellow.

“Unfortunately, not much improvement has been made since apartheid. Inequality is almost as high as it was before,” said Salvatore.

Despite a youth unemployment rate hovering at 47 percent, and an overall unemployment rate near 20 percent, South Africa has growth opportunities, said Salvatore. The economy is the most advanced in Africa and has the highest per-capita income on the continent, barring oil-rich Libya.

“South Africa faces a duality. They have a superstructure that is advanced,” Salvatore said, referencing healthy banking and business sectors and a well-developed infrastructure, “but most of the economy is not advanced.”

The problems are primarily twofold: slow growth and disenfranchised youth. He proposed a two-track solution, one that addresses growth and calls for immediate intervention to address the youth crisis.

“The society will need to grow fast, but growth is a long-term process,” he said. “However, the youth problem can’t wait. They need to do something immediately; it’s a volcano ready to explode.”

Salvatore also said that the country’s powerful unions, once major players in the struggle against apartheid, will need to make compromises with businesses if the country is to move forward.

With poverty and AIDS among the country’s seemingly intractable problems, a service-learning program like Ubuntu is a natural fit, but why study economics in Pretoria and not London or Frankfurt?

“To put it bluntly, you could study in big world financial capitals, but [by]going to South Africa you see the other side,” said Father Egan. “The great games of the global economy come at a great cost, you can see that here in stark relief, and [you can]reflect on those decisions.”

Father Egan prepares Fordham students for their journey through beginning and end-of-term retreats. He teaches a core course in the Ubuntu program, The Story of South Africa, in which students read books by J.M. Coetzee and André Brink, and watch films like Cry Freedom.

Once initiated, the Fordham students bring New York-style integration to Pretoria.
“We’re in a melting pot, so cultural diversity is already here, we know about it, and the new South Africa is in transition to what we already have,” said Themeli.

The Emerging Markets master’s program students—half from Pretoria and half from Fordham—compare data on the South African economy with other emerging and established markets. Each student writes a paper on the nation’s economic prospects.

But what at first glance appears to be a simple economics lab holds underlying lessons, said Father Egan.

“Many of the [South African] students that the Fordham students meet are from poor areas,” he said. “I hope the programs will bring out the element of justice. It’s not that they should find a simplistic solution, but that they develop a desire to find a solution.”