skip to main content
Return to Fordham University
You are at:Home»Inside Fordham»Obama Presidency Rooted in History of Black Presidential Candidates 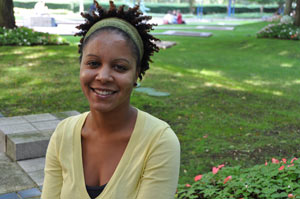 The 2008 presidential election is among the most historic in United States history. But as political scientist Christina Greer, Ph.D., has found, the election of the nation’s first African-American president was actually 150 years in the making.

“Barack Obama is the product of 150 years of people slowly doing things on an institutional level to get him—within a party, as a black person—elected to the highest office in the country,” said Greer, assistant professor of political science.

She is conducting research that shifts the focus away from the absence of an African-American president to what she sees as a more important issue—the origin, legacy and lessons of the African-American candidates who ran for president prior to Obama.

Greer got the idea for her study in the weeks leading up to last fall’s election while designing a lecture comparing Barack Obama to two-time presidential candidate Jesse Jackson. She found Obama did many things like his predecessor—he adopted the 50-state strategy, he was charismatic, he had the narrative of growing up without a father, he had a multicultural coalition, he got young people involved and targeted union workers and working-class people.

“I’m not saying he plagiarized Jackson’s campaign,” Greer said, “but their campaigns are very similar.”

That’s not surprising, since Barack Obama was 23 years old when Jackson ran in 1984.

From 1872 to 2008, more than 30 African Americans ran for president of the United States. Roughly two-thirds ran on a third party or independent ticket. Forty-five percent of these candidates were women. All were symbolic candidates.

“In the 1960s and 1970s, for example, some of these candidates ran on tickets such as the Communist party and the Black Leadership party. Obviously, they weren’t going to win,” Greer said. “But there’s something about symbolic candidates that, over time, actually contributes to legitimate party politics.”

They contributed to the registration of African-American voters. They changed party rules and state laws to facilitate increased black political participation and the participation of marginalized communities. Perhaps most significantly, they got a host of African Americans involved in politics at the lower and state levels.

“They helped to create a type of bureaucracy,” Greer said.

For example, Greer said, many of the people who worked with Jesse Jackson in his 1984 and 1988 campaigns were part of a wave of black mayors that took office in several states in the late 1980s and early 1990s.

“Where did all these people come from? They all worked on Jesse’s campaign,” Greer said. She referred to former campaign volunteers such as Donna Brazile, who went on to manage Al Gore’s 2000 presidential run. She is the first African-American woman to manage a major party presidential campaign.

“So this symbolic candidacy bred a group of secondary- and tertiary-level bureaucrats,” Greer said. “If you add up the last 40 years and the roughly 40 people who have run, that’s a lot of people that you sort of brought into the political process. Remember, African Americans have only been voting in this country for about 50 years, so this is all kind of new.”

“Now that’s not different or radical,” Greer said. “But if you go down to that third level, you’re seeing blacks, Latinos, Asians and women—people who have traditionally been outside of those bureaucracies, but these campaigns have brought them into the fold.”

Another example of a symbolic candidate is Shirley Chisholm, who ran for president in 1972.

“She goes out to California and gives a talk at Scripps College. Why would she be giving a talk at a college? It’s not like they can give you lots of money,” Greer said. “She is not going to become president, but she is trying to do something with her candidacy and to get people involved. So a lot of these symbolic candidates are actually symbolic movements as well.”

A 21-year-old Barbara Lee sat in that audience and later volunteered to work on Chisholm’s campaign. Today, she is a congresswoman in California.

“When we look at these names over time, again and again we say, obviously, you’re not going to win. But look at all the other people who you brought in, in traditional and nontraditional means,” Greer said.

Even those candidates who ran on independent tickets—such as the Looking Back Party (Isabell Masters) or the Queer Nation Party (Joan Jett Blakk)—brought people who might not have traditionally voted into the voting booth.

“Political scientists always say voting is hereditary, so those people who went into the booth to vote for one of these symbolic candidates might have created a whole new legion of voters,” Greer said. “These symbolic candidacies have done a lot for blacks within American political development.”