skip to main content
Return to Fordham University
You are at:Home»Inside Fordham»Novelists Offer Insights Into Writing Fiction and the Creative Process at Russo Lecture 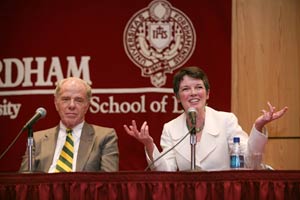 Novelist Alice McDermott discusses the art and craft of writing along with author William Kennedy.
Photo by Michael Dames

Two American literary giants spoke candidly about their characters, their Irish Catholi-cism and their creative roots at the ninth annual Russo Lecture at Fordham University’s Lincoln Center campus on April 25.

The event was sponsored by Fordham’s Archbishop Hughes Institute of Religion and Culture and moderated by George W. Hunt, S.J., director of the institute and former editor-in-chief of America magazine.

Both McDermott and Kennedy are Irish Catholic whose works are heavily rooted in geographical settings—McDermott’s novels take place on Long Island, and Kennedy’s in Albany, N.Y. The settings, however, are background to the greater metaphors found in literature, McDermott said.

“I don’t write about these places out of any inherent interest in the place,” said McDermott, author of the 1998 National Book Award-winning novel Charming Billy (Farrar Straus Giroux, 1997). “But for my characters, to understand them and to understand what we all experience, New York City and Long Island have proven to be a proper metaphor.”

Both locations evoke what she called the “geography of yearning.”

“There’s that sense of moving on, of wanting something better for our children, for ourselves,” she said. “I’m sure there are other places in the country that would fit as nicely in the metaphor, but this is the territory I know.”

Kennedy said he wrote his 1984 Pulitzer Prize-winning novel Ironweed (Viking, 1983), part of his Albany cycle of novels, after moving back to that city. Kennedy said that his childhood neighborhood in north Albany was called Limerick.

“Growing up, I just assumed that everybody was Irish, Catholic and a Democrat,” said Kennedy, noting that he was the first person in his extended family to marry a non-Irish Catholic. “When I went back to write about the neighborhood, suddenly I began to see all the ethnic history, to understand the movement of the Irish, the love of the church, and the politics—[Albany] has one of the oldest, nonpareil, political machines which has been in power since 1921.”

Quinn said Kennedy’s work “reminds us that style is the signature of the soul.”

“It’s the writing that makes an ordinary story an extraordinary work of art,” he said. He called Kennedy’s latest novel, Roscoe (Viking, 2002), about post-World War II Democratic politics, an example of the author’s talent as a comic writer.

Barry, meanwhile, told the audience that he thinks a lot about the “energy” of words. “In my profession, readers look for the first hint not to read something—my job is to grab them by the throat,” he said.

McDermott was surprised at being labeled an Irish writer, saying that “everybody came from someplace else.” The Catholicism in her work, she said, was more essential to her fiction.

“What do we want?” she asked. “We want redemption. We want eternal life. The church provides a language to say things my characters might not [otherwise]articulate.”