skip to main content
Return to Fordham University
You are at:Home»Inside Fordham»Nostra Aetate: Challenges of Passing on Religious Traditions in Secular Society 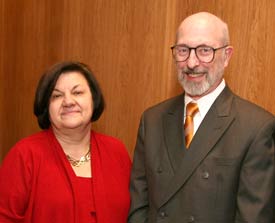 Rabbi Carol Levithan and Peter Steinfels, Ph.D., co-director of the Fordham Center on Religion and Culture, said the biggest challenge to religious tradition is a “culture of extreme choice.”
Photo by Michael Dames

For more than a decade, researchers have been documenting the drift away from organized religion, especially among young Americans. The numbers are stark: a 1990 National Jewish Population Study that found that nearly half of all Jews were marrying outside the faith; a 2004 survey by the National Opinion Research Center in which 40 percent of respondents age 18 to 30 said they did not have very strong religious affiliations, and another 20 percent said they had none at all.

Given the data, some scholars have called into question the strength of an emerging generation’s attachment to the moorings of religious tradition. The findings beg the question: Can religious traditions and values be passed on in an increasingly secular world?

For Rabbi Carol Levithan and scholar Peter Steinfels, Ph.D., who took part in a panel discussion on the subject on Nov. 1 as part of the annual Nostra Aetate Dialogue at Pope Auditorium, the answer is yes—but it won’t be easy.

Rabbi Levithan and Steinfels said the challenges to religious tradition are everywhere: science, politics, intermarriage, and even art and commerce.

“Secularism no longer seems to be winning where religion is losing,” Steinfels said. The real competitor has now become “consumerism,” he said, or, put more neutrally, “a culture of extreme choice.”

“Until recently the challenge of passing on religious traditions was not something Jews and Catholics would come together to discuss,” said Steinfels, co-director of the Fordham Center on Religion and Culture and author of A People Adrift: The Crisis of the Roman Catholic Church in America (Simon & Schuster, 2003). “Passing on the tradition was a struggle not a common concern. It was a kind of zero-sum game: What one tradition lost the other gained. This was, of course, particularly felt by Jews, existing as an often-endangered minority in an overwhelmingly and often aggressively Christian environment. The parallel Catholic concern was the loss of the faithful to the overwhelmingly Protestant culture of America.

“This kind of struggle has not disappeared… but what dialogues like this evening’s suggest is that Judaism and Catholicism and other religious traditions are no longer viewing one another simply… as rivals. They are increasingly viewing one another as confronting a common challenge, one associated with that great historical process we call secularization.”

To Steinfels, the culture of extreme choice, created by an open and secular American society, is not necessarily leading young people to repudiate religious identity altogether but dramatically to minimize its importance, what he called a “global religious cooling.”

For Rabbi Levithan, senior program director of learning, outreach and adult programs at the Jewish Community Center, the openness of American society has made it easier for Jews to opt out of their religious tradition. And yet she remains upbeat about the faith’s ability to cross the generational divide, partly because of the unique nature of Jewish identity.

Jewish identity, she said, is based on birth, not religious belief. Jewish religion and identity overlap but are not identical, and thus Jews whose links to their religious traditions have slackened still find a place in a broader cultural identity— of which religion is an inextricable part.

She said recent studies have shown that this identity can flourish even among secular Jews and the intermarried, which bodes well for the ability to pass on the faith—albeit in nontraditional ways.

Particularly telling, she said, was a recent study that found that 15 percent of respondents described themselves as “just Jewish” and 10 percent as secular or having no religion. Yet 92 percent of all respondents reported attending a Passover Seder regularly or sometimes, and 88 percent reported lighting Hannukah candles.

“Correlations between beliefs and behaviors can be quite surprising,” said the rabbi. “Eleven percent of those who described themselves as secular or having no religion light Shavuot candles, and 24 percent fast on Yom Kippur. So for consistency, do not look for Jewish on your online dictionary.”

In his presentation, Steinfels laid out five components that he believes are essential to effectively passing on Catholic religious traditions. Among them are providing opportunities for young people to have intense religious experiences—activities like World Youth Day, retreats and community service. Other components include promoting habits of spiritual practice from daily prayer to Sunday Eucharist, and creating venues for people to relate their faith to personal moral quandaries and public issues.

Steinfels said he finds that some of these components are implemented effectively by conservative initiatives, others by liberal efforts, but often only one or two are emphasized at the expense of a more comprehensive approach.

Rabbi Levithan said that the Jewish community has made efforts to reestablish Jewish traditions within the family among Jews who have intermarried, and there are new approaches to spirituality, namely a growing interest in Jewish mysticism and establishing small, informal communities that meet on Shabbat and holidays.

Moreover, the prominence of Jewish identity in popular culture “has provided a wealth of new opportunities to connect with Judaism for secular Jews and especially young Jews, who may not have any formal affiliation with the Jewish community,” she said.