skip to main content
Return to Fordham University
You are at:Home»Inside Fordham»Noise Expert Says Government and Citizens Must Insist on Anti-Noise Methods 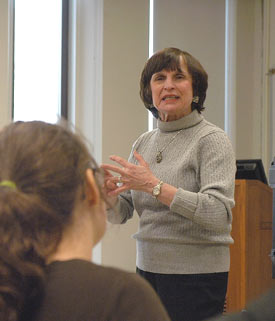 Though New York City is among only a few metropolitan areas to have noise codes, it has not kept up with the growth of noise problems, an expert in the field said March 6 at Fordham.

“Resident complaints about noisy aircraft have increased tremendously in the past decade, but neither federal nor local governments have responded,” said Arline Bronzaft, Ph.D., an environmental psychologist and member of the Council on the Environment of New York City. “We simply don’t fund noise research in this country.”

Bronzaft, professor emerita at Lehman College, City University of New York, discussed how noise can impede the ability of children to learn, cause stress and set off other physiological responses, such as increased blood pressure, changes in heart rhythms or an excessive secretion of hormones.

“There are studies that prove that a child growing up in a noisy household is slowed down in the area of language development,” Bronzaft told students in the urban psychology class where she was a guest lecturer.

Often referred to as the “the noise lady” because her research was instrumental in creating New York City’s noise code in the 1970s, Bronzaft said citizens must urge lawmakers and police to enforce existing measures to keep tabs on noise.

“You see the signs banning car honking, but it happens anyway,” she said. “New York City is a city of vibrant sounds, and we don’t want it to be a quiet city, but we must do something to lessen the din.”

“This will bring even more distress to the millions of people who live near airports and have to endure the noise coming from overhead jets,” said Bronzaft, who is an expert witness and consultant in environmental psychology.

Americans were protected from harmful noises under the Noise Control Act of 1972, Bronzaft explained. It established a means for coordination of federal research on noise and provided information to the public on noise standards. Moreover, citizens had the benefit of an office created by the Environmental Protection Agency that oversaw the impact of noise on the public—the Office of Noise Abatement and Control (ONAC).