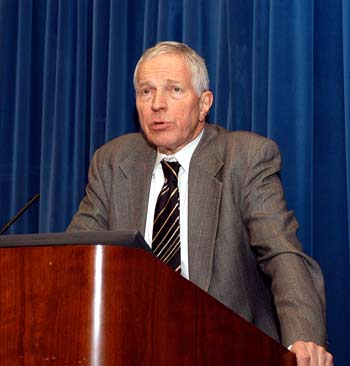 Edmund Phelps, Ph.D., discusses the ramifications of the mortgage lending crisis as part of the Department of Economics Distinguished Lecture Series.
Photo by Ken Levinson

Though most economic booms tend to be followed by busts, they aren’t all bad, a Nobel Memorial Prize winner said on March 26 during a visit to Fordham.

“I liked the boom during the second half of the 1990s because it was led by the Internet revolution,” said Edmund Phelps, Ph.D., the McVickar Professor of Political Economy at Columbia University. “But this most recent mortgage boom [of the 2000s]seems to have been driven by an outbreak of lending coming from the financial center. It is an example of malinvestment and its ramifications.”

Phelps, winner of the 2006 Nobel Memorial Prize in Economic Sciences and featured speaker for the Department of Economics Distinguished Lecture Series, discussed the theories of Friedrich Hayek. The Austrian-born economist’s research on the natural rate of interest and unemployment can lend insight into what is occurring in today’s economy, Phelps said.

“We’re at the end of a Hayekian boom and wondering if we’re going to hit a Hayekian slump,” Phelps said at the event, which took place at the William D. Walsh Family Library on the Rose Hill campus.

Hayek, who Phelps called “one of the most revolutionary thinkers of the 20th century,” argued that the upheavals in a boom may change the natural rate of interest, and if left unelevated, failure by the central bank to raise its interest rate accordingly would cause inflation.

“Hayek was intrigued by the idea that a boom originating in missteps would be characteristically followed by a slump,” Phelps said. “Something like that may be happening now.”

When asked if tightening regulations could prevent today’s mortgage lending crisis from happening again, Phelps said he wasn’t sure.

“The short answer is we need a huge improvement in corporate governance,” he said. “Shareholders need to make better choices in selecting managers and there needs to be better incentive pay arrangements so that loan officers don’t go off on a lending tangent.”

Phelps, who directs the Center on Capitalism and Society at Columbia’s Earth Institute, received the Sviriges Riksbank Prize in Economic Sciences for his analysis of inter-temporal tradeoffs in macroeconomic policy in 2006.