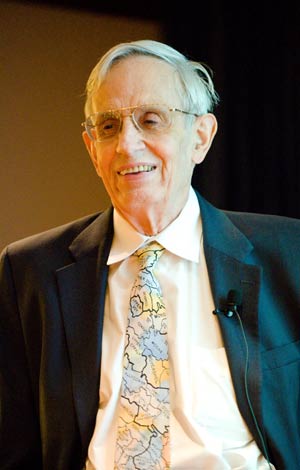 More than 200 members of the Fordham community converged upon the Flom Auditorium on Oct. 14 to hear John Forbes Nash Jr., Ph.D., winner of the 1994 Nobel Memorial Prize in Economic Sciences, talk about solutions to the downturn in the national and global economy.

Nash told the audience that such financial crises would be less likely to occur if there was some international monetary standard, such as the gold standard or competition among worldwide currencies, to curb inflation and prevent the rise of mortgage abuses. He expressed some skepticism about a government bailout as a solution.

“I get the impression that the government is not ready to do anything that is really beyond a short-term basis,” said Nash, a senior research mathematician at Princeton. “[But] we need a natural stability of value.”

Nash said that various interest groups that subscribe to Keynesian, or short-term, economic theories have sold the public on the notion that inflation is acceptable or that “bad money is better than good money.” Such a notion, he said, led to the dangerous proliferation of bad mortgage loans—loans made on the gamble that house values would continue to rise and eventually turn a profit.

“A fixed-rate 30-year mortgage would be reasonable under the gold standard,” Nash said. “Now, there are variable rates, and adjustables, and convertibles, and it is very complicated” for homeowners to figure out what they are getting into. In fact, Nash said, nobody really knows the depth of the financial crisis.

Having an internationally oriented money standard would promote better quality currencies and less inflation, he added.

Nash further said that any such new international monetary system should be democratically determined, and cited the recent vote in Sweden not to abandon the Krona for the Euro.

Nash shared the 1994 Nobel Memorial Prize with two other economists for research in game theory, a method of predicting behavior in strategic social situations and a tool now widely used by economists and biologists. His academic notoriety was catapulted into celebrity status in 2001 when he and his wife, Alicia, became the subject of the movie A Beautiful Mind. The film was nominated for eight Oscars and won four. The movie, part of which was filmed in the basement of Keating Hall, documents Nash’s seminal contributions to game theory and mathematics and his subsequent 25-year struggle with schizophrenia.

The event was also attended by special guest Charles Soludo, Ph.D., governor of the Central Bank of Nigeria.

Dominick Salvatore, Ph.D., Distinguished Professor of Economics, introduced Nash and Saludo to the standing-room-only crowd and concurred with the need for a new international regulatory system more in tune with today’s global economy. “The entire financial sector has to be regulated, but those regulations cannot be specific,” Salvatore said. “Money is fungible. You have to be comprehensive, but general.”

Reform starts at home, Salvatore argued. “We need less exotic derivatives and much more transparency. And the U.S. has to live within its means. We save practically nothing at the individual level . . . we have a huge trade deficit and we are mortgaging our future.”

The event was part of the Distinguished Lecture Series hosted by Fordham’s Center for International Policy Studies.