skip to main content
Return to Fordham University
You are at:Home»Faculty Profiles»No Cause for Alarm: Negotiating New Media with John Carey 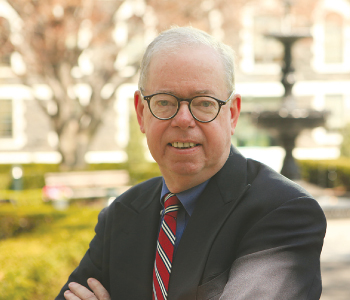 Most professors didn’t choose academia to become media stars. But personality-driven new media is here to stay, and many academics are nervously sailing into uncharted waters.

As a professor of communication and media management in the Schools of Business, John Carey, Ph.D., FCRH ’68, isn’t concerned for the profession, as he has studied similar changes for decades.

Whether it’s politicians dealing with their televised images in the 1960s, or television networks dealing with a multitude of platform choices in the 2010s, Carey’s fascination with media theory has adapted with the times, with a particular focus on behavior as it relates to new technology. Much material is analyzed in When Media Are New: Understanding the Dynamics of New Media Adoption and Use (University of Michigan, 2010), which he coauthored with Martin C.J. Elton.

After studying at Fordham with renowned media theorist Marshall McLuhan, Carey went to the University of Pennsylvania’s Annenberg School for Communication, where he wrote his dissertation on political candidates’ behavior on and off camera.

He interviewed the media staff from both the Kennedy and Nixon campaigns about the nation’s first televised presidential debate in 1960. He learned that neither Kennedy nor Nixon wanted to be seen by the press walking into the makeup room before the debate. They feared an emasculating headline like: “Kennedy/Nixon wears makeup.”

But Kennedy’s media camp understood the effects of harsh TV lights. They purchased makeup at a local drugstore and applied it to their candidate in private.

“Kennedy was no better than Nixon in understanding television,” said Carey, who suggested Kennedy owed his successful appearance to his handlers. “Politicians, then as now, are not as savvy with media as people think.”

Carey went on to study the convergence of broadcast television and telecommunications via an interactive television system that linked five senior citizen centers by two-way cable. What was initially funded as a way for the seniors to share information on social security and nutrition, via a local cable channel, became a space for seniors to meet and have fun.

One particularly popular segment featured Mary, a former recluse at the center who presented weekly bargains found at local supermarkets. Her cable segment was simple: she clipped sales news from the newspaper and then read it to the cable audience. In her own low-tech way, Mary had “gone viral” and become a local celebrity, said Carey.

“The low production quality of the show actually was very human, and that’s what made it so popular,” he said. “This was social media before it was called social media.”

Most recently, Carey completed a study for NBC that focused on the use of second and third screens by television viewers during the 2012 London Olympics. He found that, counter to what some network executives had feared, smartphones and tablets did not detract from TV viewership; rather, they whetted viewers’ appetites to watch the events later on television.

Whether they be politicians, doctors, senior citizens, or consumers, people altered their behavior alongside of evolving technology, Carey’s research has shown. Clearly, changes are coming to academia too.

“There is no question that online classes will become more prevalent,” said Carey. Whether the future of academia will focus on personality-driven lectures for Massive Open Online Courses (MOOCs) or simply enhanced interaction on Blackboard, is fodder for debate.

Carey doubts professors will need to develop on-screen personalities, but their presentations will matter more, as will their ability to interact online. While he does not recommend an all-out plunge into the Twittersphere, he does believe that faculty should embrace the changes at least incrementally.

“That guest lecturer who you’d like to invite up to the Bronx but are reluctant because you might be imposing on their schedule, they can now can do it from their office via Skype and it’ll take no more than 20-30 minutes of their time,” he said. “You’re the expert, but now you can bring in other experts.”

Academics who believe the academy’s on-campus enrollment will drop with online delivery platforms may also be mistaken, Carey said, just as NBC executives were mistaken about TV viewership and new platforms.

“There are definite advantages to face-to-face. I don’t think universities or classrooms are going to go away,” he said. “But the mix is going to change. I don’t want to assign a number—whether it will be 10, 20, or 40 percent—but there will be a higher percentage of courses offered online.”