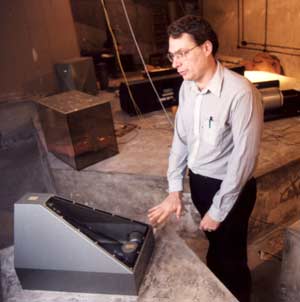 Benjamin Crooker, Ph.D., sometimes ventures 30 feet beneath the gneiss bedrock to check on the seismic instrumentation.
Photo by Bruce Gilbert

The Fordham University Seismic Observatory, a fixture on the Rose Hill campus since 1910, is the oldest such station in New York City. Housed in a small, Gothic stone building beside Freeman Hall and dedicated to the memory of former student William Spain, it is part of a national network of observatories that reports its data to the U. S. Geological Survey in Boulder, Colo. Its position in the realm of earthquake news is a far cry from the station’s halcyon days of the 1940s and 1950s, when Father Joseph J. Lynch, S.J., was the go-to guy for New York media, and slept in a hammock outside the station during the summer, the better to monitor the machinery 28 feet below the surface.

These days, one seismometer does the work that used to require three (or sometimes nine), and though the artifacts of Father Lynch’s six-decade tenure are still on display, the newer machine, carefully encased in plexiglass and wrapped in a comforter to avoid temperature fluctuations, is monitored by Benjamin Crooker, Ph.D., of the University’s Department of Physics.

Fordham is one of a handful of broadband seismographic stations in the New York-New Jersey region that feeds its data to the Lamont-Doherty Earth Observatory in Palisades, New York, which in turn compiles and sends all the regional data to Boulder. The Guralp DM24 CMG3T machine, which combines the functions of a seismometer and digitizer, helps researchers make, effectively, a “CAT scan of the Earth,” according to Crooker. “Fordham’s station is like one cell in a giant camera,” he said, “used to build a seismic map of the earth.”

What these seismic stations can tell us, beyond the location of earthquakes, is fascinating: scientists have been able to determine, for instance, that the earth’s inner core, composed of iron, actually spins at a different speed than the planet itself.

In the Freeman Hall basement, a Dell computer outfitted with the Scream! and Earthworm programs, is connected to the subterranean equipment next door and sends its data in real-time to the Columbia-manned observatory across the river. Whereas Father Lynch relied on data that was recorded on photographic paper and a total of nine seismometers, these days one machine handles all the work in a much smaller area. (A galvonometer with a mirror that registered big shocks, beamed a light onto the paper, alerting Father Lynch when a “big one” hit, such as the temblor which destroyed much of Managua in 1931). In Father Lynch’s time, one seismometer each was dedicated to East/West, North/South, and Vertical measurements, and by “triangulating” the data, he could best determine where it came from: a shaker from Washington state, for example, would have been picked up by the East/West machine first (the P or pressure waves), then the secondary (S waves) by the North/South machine.

The seismic station has moved twice during its time at Fordham, from its original location near the current softball fields, to the site of Keating Hall, to its present catacomb-like station beside Freeman. Archival photographs show the entire stone structure being dragged by horse-and-sledge across the campus. The building has some interesting cultural iconography: a plaque from Pope Pius VI (among Father Lynch’s achievements was using seismographic equipment to attempt to locate St. Peter’s tomb beneath the Vatican); and a masonry depiction of what Crooker says is an ancient Chinese seismograph: a small iron ball resting atop a pedestal, which would fall into one of the mouths of a group of carved frogs nearby. By noting which frog’s mouth held the ball, Chinese scientists of yore could determine the direction of the earthquake’s waves.

A machine that Crooker hopes is never called into prominence sits directly beside the current seismometer, and is the geologists’ equivalent of an airplane’s crash data recorder “black box.” This strong-motion seismometer kicks off when a measurement of 5 or greater on the Richter scale is recorded—probably enough to break or damage the regular seismometer next to it. It has a backup power supply that would keep it running for days, or until it’s presumably recovered from the rubble, should such an earthquake hit the New York area.