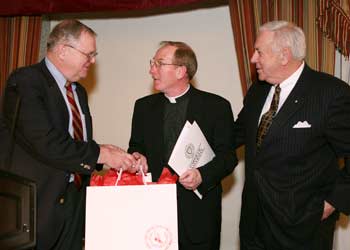 The challenges that Catholic education has met and overcome in the last half century will pale in comparison to the challenges of the next 50 years, according to Joseph M. McShane, S.J., president of Fordham.

Father McShane issued this call to action in an address given Jan. 25 at the New York Athletic Club. With him as their guide, the crowd that gathered amidst the opulence of New York’s most-esteemed athletic organization took a walk through the history of Catholic schools in America and considered their prospects for the future.

“Retirement will tax the will of the Catholic community as never before, as priests, brothers and nuns step down,” he explained. “The Catholic school system will survive and thrive only if it demonstrates the adaptability it did in the 19th and early 20th centuries. In must be responsive to the needs of its people.”

As waves of Catholic immigrants began hitting American shores in the mid-1800s, the Church felt the need to protect itself and its people from the ethnic and religious prejudices they encountered. So to preserve the faith, they created a parallel system of schools, hospitals, orphanages and reform schools.

“Faith was one of the portable treasures that the immigrants were able to bring with them,” Father McShane said. “As for the prejudice they encountered, that only made them want to hold on to it even more.”

At the time, the American bishops decided that before each new church could be built, a school had to precede it. Once the schools were established, the bishops sought to ensure that Catholic schools reflected the neighborhoods where they were located—both linguistically and culturally.

The post-World War II movement of Catholics from urban neighborhoods to the suburbs signaled more growth, which lasted into the mid-1960s.

“After Vatican II, the vocations dried up almost overnight. The staffing of the schools dried up,” Father McShane said. “The Society of Jesus crested in 1964-1965 with 36,000 Jesuits throughout the world. From 1540 to 1964, we had never experienced diminishment. Today, the Society is roughly 20,000 strong.”

Catholic schools then took on a new mission: To educate the underprivileged inhabitants of the old ethnic neighborhoods, whether they be Catholic or not. Today, those schools continue to serve the poor by emphasizing character and academic excellence. Meanwhile, in the suburbs, Catholic families have rediscovered the value of what Father McShane called the “Catholic educational brand.”

In the years and decades to come, the Church must find a way to replenish the scores of retiring priests, brothers and nuns who built and sustained Catholic schools more than 150 years. It also must be as vital to new Catholics as it was to the Irish and Italian immigrants who came to America
a century ago.

“In the future, the Church will be called on to cater to the needs of Latino Catholics, African American Catholics, Caribbean Catholics, suburban Catholics, and yes, even wealthy Catholics,” Father McShane said.

The challenge is great, but he told the audience he believed that Catholic education in America has a vibrant future. He explained:

“The need will bring them in. The desire for success will keep them in the seats. The wisdom of love, and the love of wisdom, will change their lives.”