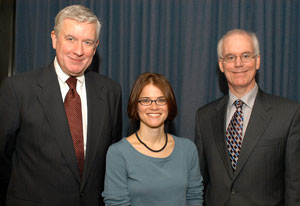 Kira Bindrim, a Fordham College at Rose Hill senior, received the 2006-2007 Edward A. Walsh Scholarship at a luncheon in the President’s Dining Room, Lowenstein Center, on Oct. 25. Bindrim, a frequent contributor and editor of the Op-Ed page for The Ram, is the fifteenth recipient of the award, created by a group of Walsh’s former students, many of whom attended the event, as did former award recipients. The scholarship carries not only the name of the well-loved Rose Hill professor, but a significant award toward the winner’s tuition.

Bindrim, currently an intern at Crain’s New York Business magazine, said she hoped to carry on the spirit of Walsh, a man who during his tenure knew everyone at Fordham from the cleaning women to the University president. “I hope to bring that kind of integrity and humanity to my own career,” she said.

Brennan O’Donnell, Ph.D., dean of Fordham College at Rose Hill, remarked on Bindrim’s language ability—she perfected her Spanish at Rose Hill—which he said was an asset in this increasingly polyglot world. He, like other committee members, was “absolutely bowled over by her prose.”

O’Donnell also complimented the senior for her editorial acumen, noting “she took as much pleasure in making someone else look good as herself. That’s a selflessness that’s rare these days and a virtue we should applaud and celebrate.”

Frank Corbin, FCRH ’50, adjunct professor of communication and media studies and also a former editor of The Ram, had high praise for both the scholarship winner and its namesake. (Corbin and Walsh are the only two teachers of Fordham’s Public Relations class in the course’s six decades.) He said Walsh was not only a bit of a “father confessor” figure on the campus, but was on the cutting edge of communications, corresponding with Marshall McLuhan in the late 1940s before McLuhan was a well-known name.

Warren Spellman, FCRH ’56, mentioned in his closing remarks that the Walsh award had a predecessor in the J. McGill Patterson award, named for the founding publisher of the New York Daily News.

“Welcome to getting the award…you were just a bloody knockout, and your work was superb,” Spellman said. “You found out where journalism is going—this new medium of the Internet.”

Fittingly, a commemorative booklet produced by the original Walsh committee in 1965 was presented at the luncheon, having been reproduced in the Edward A. Walsh Digital Media Laboratory at Rose Hill. Among its accolades for the late professor: “He opened Fordham’s eyes to the role of mass communications in preparing students for professions in the media.”

“[Bindrim] does two things well,” Corbin said. “She writes coherently, and she’s interested in doing a great deal, and not waiting for the world to come to her.”